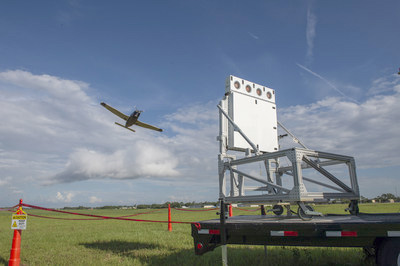 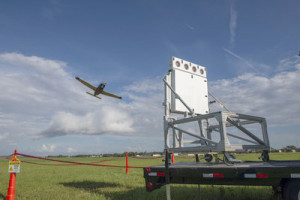 “This radar is like a Swiss Army Knife; it has broad applications across a lot of missions,” said Matt Gilligan, vice president of Raytheon’s Navigation, Weather and Services mission area. “Its extended range expands options for managing multiple fast aircraft on approach.”

LPR’s origin as a weather radar gives it an advanced dual-polarization capability that allows it to discern between heavy rain, hail, snow and sleet. It can also detect non-meteorological echoes from ground clutter, birds, and tornado debris. It does this by transmitting and receiving both horizontal and vertical polarizations, unlike most radars that only transmit and receive radio waves with a single polarization.

Because it’s an AESA radar, it offers higher-quality images than conventional radars. Phased-array radars are also cheaper to maintain and offer adaptive beam scanning, which allows the radar to track more targets and interweave between different radar applications.

With no moving parts, LPRs are more reliable and easier to maintain, giving them longer lifetimes and lower life-cycle costs. The program is on track for initial production in 2019.