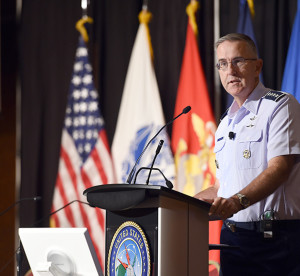 The men and women of U.S. Strategic Command are ready to respond to any threat, Stratcom’s commander said Aug. 1 in La Vista, Nev.

Speaking to reporters during a deterrence symposium, Air Force Gen. John E. Hyten  noted positive developments regarding North Korea, including the United States and South Korea engaging in talks with that country.

There is the potential for denuclearization, he added. “I can tell you from a Stratcom perspective, any time statements are coming out [and] politicians are talking, I’m much happier,” Hyten said. “Nonetheless, our responsibility is to always be ready — and so we will always be ready.”

The force is fully ready and fully postured to deal with any threat that comes out of North Korea, the general said. “The missile defense capabilities in Alaska are fully prepared, California [is] fully prepared, and our deterrent force is on alert, fully prepared right now,” he stressed.

He outlined Stratcom’s three priorities: to provide a strategic deterrent for the United States and its allies, provide a decisive response if deterrence fails, and act with a combat-ready force.

“The nuclear capabilities provide the backstop. It is the most important element of it,” he said. “It is the first priority, but it can’t be the only priority.” 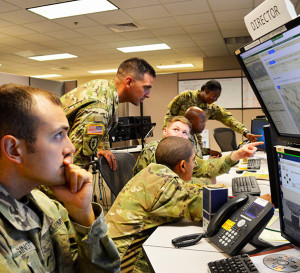 Army photograph by Jason B. Cutshaw

The United States has to look at nuclear, space, cyber, conventional and all the pieces that come together, he said, and “work with our allies to create the environment where peace can take hold in the world.”

Same goal, changing security environment
The goal of deterrence remains the same since the original discussions on the topic in the 1960s, Hyten said. That objective, he noted, is to impose costs on an adversary, deny benefit to that adversary and make sure that the capabilities are communicated credibly so the adversary will not act.

But what has changed since the 1960s, he pointed out, is the global security environment.

“Today we have not just one adversary, we have many potential adversaries, and everything that we do in all parts of the world impacts everybody else,” Hyten said. 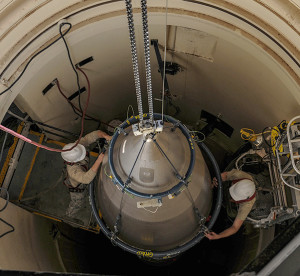 Airmen from the 90th Missile Maintenance Squadron prepare a re-entry system for removal from a launch facility in the F.E. Warren Air Force Base missile complex in Wyoming, Feb. 2, 2018. Missile maintenance teams perform periodic maintenance to maintain the on-alert status for launch facilities, ensuring the success of the nuclear deterrence mission.

Honoring those who serve
The deterrence mission is possible because of the men and women dedicated to safeguarding the nation, Hyten said.

Stratcom comprises 162,000 service members who are serving around the globe, Hyten said. “They climb down into the holes of the missile fields and they climb onto a submarine and they go on alert. They fly the bombers. They go to work in the space business,” he added.

Deterrence is an active mission, Hyten said, and Stratcom’s men and women are trained, resilient and equipped to do the job.

“Deterrence does not exist just because we have capability,” he said. “It has to be capability that is practiced, that is ready, that our adversaries know [is] ready, and we’re able to respond to any threat that comes after the United States of America.”