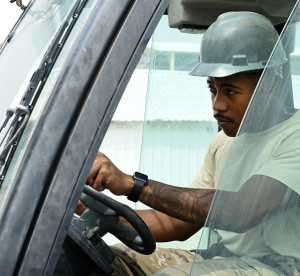 Airman 1st Class Ladavion Humphrey, 407th Expeditionary Force Support Squadron postal mail clerk, operates a forklift to unload a mail delivery truck, Aug. 6, 2018, at an undisclosed location in Southwest Asia. The post office processes and sorts over 1,000 pieces of incoming mail each day. Humphrey is deployed from Edwards Air Force Base, Calif., and is a native of Edmond, Okla.

The post office at the 407th Air Expeditionary Group helps thousands of service members stay in touch with loved ones every day through the delivery of care packages and letters from home.

“There is a lot of good with having the Air Force Airmen here working with us,” said Staff Sgt. Maurice Jones, SPMAGTF-CR-CC postal chief.

The three Marines are deployed from Camp Pendleton, Calif., where they all perform postal duties at the same post office, but for the two new Air Force Airmen, working in the post office is entirely new to them.

“I like it, it’s something different,” said Staff Sgt. Desiree Tuazon, 407th Expeditionary Force Support Squadron NCO in charge of postal services. “I’ve been doing commanders support staff my entire career and this is a great opportunity to do something different.”

Tuazon admits it is a lot of work but it keeps her busy and the days go by fast.

“This new crew of Airmen just came in and got the ball rolling right away,” Jones said. “They want to learn everything, which helps because 90 percent of the customers we serve every day are Air Force members.

“At first it was intimidating coming to work with the Marines, but we worked to build a rapport with them,” said Tuazon, a native of the Philippines, and deployed from Beale Air Force Base Calif. “We figured it’s a good opportunity for us to learn from the Marines and see how they do things.”

The post office processes and sorts over 1,000 pieces of incoming mail each day.

Once the mail truck arrives to the base, a forklift is used to move the 10 or more tri-walls from the truck to the post office. The mail is then sorted and distributed to Airmen, Marines, Sailors, coalition partners and civilians assigned to the base.

“Postal is very important to the mission, the base and the people,” said Jones, a Philadelphia, Penn., native.

“All these boxes and care packages help a lot of people, like when companies that care about military members send us snacks and hygiene gear and stuff like that, it really helps people out,” Jones said. “So whenever the mail shows up and they get these care packages and you see their facial expressions, they love it.”