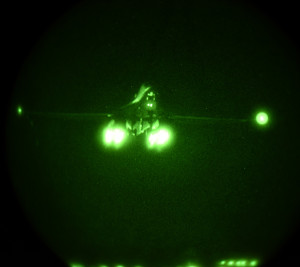 A B-1B Lancer clears the runway at Ellsworth Air Force Base, S.D., Oct. 29, 2018. B-1s from the 34th Bomb Squadron flew to Norway to participate in Trident Juncture 2018. Through their participation in the NATO exercise, the bomber aircrews are able to demonstrate their ability to accomplish the mission anytime, anywhere.

B-1B Lancers from the 34th Bomb Squadron, 28th Bomb Wing, launched from Ellsworth Air Force Base, S.D., on Oct. 29 for a transatlantic flight to Norway to participate in Trident Juncture 2018.

More than 50,000 troops from 31 nations are taking part in Trident Juncture, the largest NATO exercise since 2002. All branches of the U.S. military are represented in the joint exercise.

“Trident Juncture is a chance for us to exercise with our NATO partners and allies, and it allows us the opportunity to demonstrate our resolve,” said Lt. Col. Timothy Griffith, the 34th BS commander. “If one of our NATO partners was to be attacked or needs support from the U.S., we can respond in a short period of time.”

The primary focus of Ellsworth AFB’s participation in this exercise is to show the B-1’s global reach and the 28th BW’s ability to accomplish the mission anywhere they are called to fight. The majority of the B-1s flight was over NATO countries and through international airspace.

The B-1, also known as the Bone, is recognized for its air superiority, supersonic speed and its ability to carry the most munitions in the U.S. Air Force’s inventory.

“The B-1s strategic role is to give NATO the [capabilities of a] long-range bomber aircraft that can take off halfway across the world – carrying 24 precision-guided weapons – all the way into the European theater and the ability to release those weapons onto the enemy,” said Col. John Edwards, the 28th BW commander.

This exercise displays the scope and range of the U.S. military and their commitment to the NATO alliance. In addition, it provides NATO partners and allies the opportunity to establish teamwork, communication and interoperability.

This exercise has air, land and sea elements, and Norway offers the possibility to train realistically in all of these domains.

The inclusion of bombers in this exercise is not in response to any specific event or threats. Trident Juncture gives bomber crews the opportunity to show that they are always capable and prepared to respond when necessary.

“Ellsworth Air Force Base and the 28th Bomb Wing regularly participate in exercises to support combatant commanders across the world,” said Edwards.

Participation in a joint exercise of this magnitude develops the wing’s capabilities and provides the entire base with the opportunity to train and prepare for any potential threat.

In order for Ellsworth AFB and the 28th BW to participate in Trident Juncture, it required a team effort, said Edwards. Maintainers worked to prepare the jets, and air crews have been mission planning with their NATO allies. It takes a whole-base effort to ensure that the 28th BW bombers can fly, fight and win from Ellsworth AFB – anytime, anywhere.