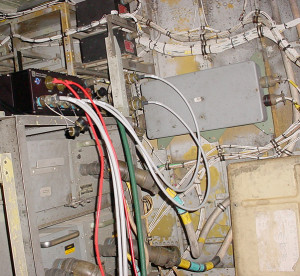 A Electrical Systems Tester hardware unit positioned inside an aircraft during a test.

A cooperative research effort between the Air Force Research Laboratory, Air Force Life Cycle Management Center and the Air Force Sustainment Center has led to the development of a next-generation electrical systems tester that will support B-52 depot maintenance and increase flight safety.

An electrical systems tester, or EST, is used in conjunction with load bank testing to assess an aircraft’s entire power system, performing one of the final evaluations before an aircraft takes flight after a depot overhaul cycle. The EST performs many functions, including verifying that output power, frequency and voltage are correct across a variety of operating conditions.

A major concern for B-52 maintainers, however, was that the currently-used EST was outdated. Vintage panel meters and vacuum tube technology dating back to the 1950s limited repair options and made it impossible to support the aging system and its key components. With few options available, the depot was in need of a modernized replacement.

“The B-52 program couldn’t find people willing to help them because the previous EST was so antiquated, and it was difficult to find any expertise in that legacy 1950s technology,” said AFRL engineer Gary Steffes. Steffes was previously assigned to the 565 Aircraft Maintenance Squadron, which is part of the Oklahoma City Air Logistics Complex at Tinker Air Force Base, Oklahoma. Because of his work with the squadron, Steffes saw firsthand the difficulties in using the outdated system for B-52 depot maintenance overhauls and reached out to experts within AFRL for help.

To address the issue, AFRL systems support researchers reverse engineered the legacy aircraft electronic testing equipment. Within a span of less than three months, the team determined what the EST did, how it functioned, how it reported its information, and what inputs were needed from the aircraft to make it work.

After mapping out this critical data, AFRL teamed with the University of Dayton Research Institute to set about the task of creating a prototype. Using the data acquired by the AFRL team, UDRI researchers designed, built and tested a system that performs all the functions of the legacy unit using a modern computer processor. The resulting product is a compact, upgradable, easily-transportable unit that can serve the B-52 maintainers well into the future. 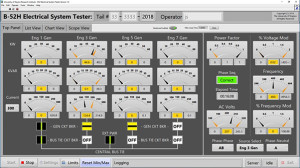 The software user interface for the new Electrical Systems Tester, as displayed for B-52 maintenance technicians conducting a test.

The new system’s increased capability will result in more reliable testing. By implementing the replacement system in depot operations, maintainers conservatively expect a 20 percent reduction in testing time. Near real-time data collection and reporting means troubleshooting electrical issues will now take minutes to hours, instead of hours to days. The new EST is portable and ruggedized, enabling potential use during flight tests in order to diagnose issues that cannot be replicated on the ground.

“By performing the research in-house and teaming with UDRI to build the initial prototype, we were able to reduce costs significantly in order to redesign new units,” AFRL engineer Brett Jordan explained. “We also restored a much-needed capability for our B-52 maintainers in the field.”

“It felt good to give something back to the program that will be used for many years,” Steffes added.

The B-52 program is interested in implementing the tester at field locations throughout Air Force Global Strike Command to maintain mission-capable aircraft. The program office is committed to working with the Air Force Global Strike Command to develop a full implementation plan for future EST deployments within the B-52 program.