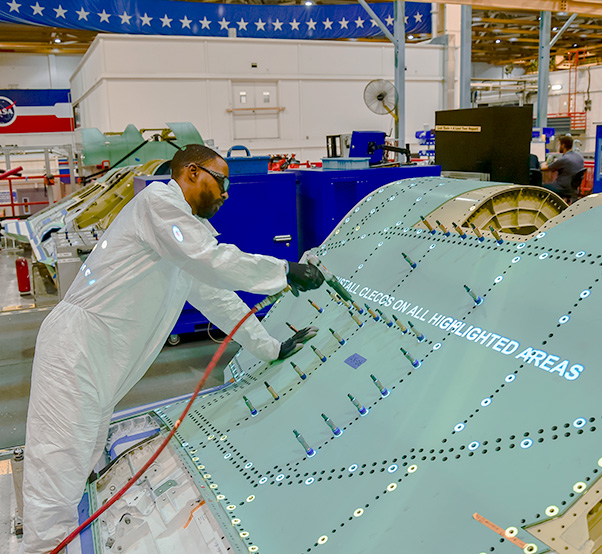 PALMDALE, Calif.–Northrop Grumman has completed the 500th center fuselage for the F-35 Lightning II – ahead of schedule.

“We deliver an F-35 center fuselage every 36 hours and I am very proud to say we have made all our deliveries since the inception of the program,” said Frank Carus, vice president and F-35 program manager, Northrop Grumman. “Our dedicated team works closely with the customer and suppliers to improve quality and affordability in support of the warfighter.”

“We have set the standard for the production of military aircraft,” said Kevin Mickey, sector vice president and general manager, military aircraft systems, Northrop Grumman. “Our teams and suppliers are constantly finding better, more affordable ways to deliver a superior product on-time, at-cost and, as with this center fuselage, ahead of schedule. When you couple this level of commitment with advanced manufacturing technologies, it’s just a win-win situation for us, our customer and the warfighter.”

A core structure of the F-35 aircraft, the center fuselage is designed and produced on Northrop Grumman’s integrated assembly line, a state-of-the-art facility supported by technologies exclusive to or pioneered by Northrop Grumman bringing together robotics, autonomous systems, virtual 3D and predictive automation to the forefront of center fuselage production.

Lockheed Martin is the industry lead for the F-35 program and Northrop Grumman plays a key role in the development, modernization, sustainment and production of the F-35. In addition to producing the center fuselage and wing skins for the aircraft, the company develops, produces and maintains several sensor systems, avionics, mission systems and mission-planning software, pilot and maintainer training systems courseware, electronic warfare simulation test capability, and low-observable technologies.