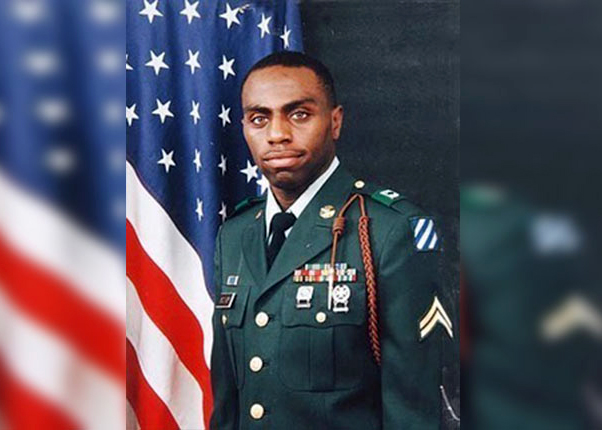 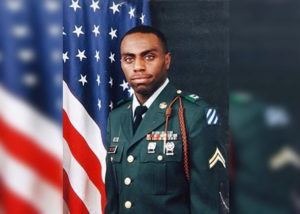 U.S. Army Sgt. Stevon Booker, shown in this undated family photo, was killed in action in Iraq. Staff Sgt. Booker was awarded (posthumously) the Distinguished Service Cross – the nation’s second highest award for valor – for his 2003 heroism in Pittsburgh, April 5.

Hundreds of 3rd Infantry Division Soldiers, Army veterans, Pittsburgh-area officials and Army leaders recognized U.S. Army Staff Sgt. Stevon A. Booker for his heroism April 5 — 16 years to the day after he was killed in action while serving in Iraq.

Booker’s mother and sister were presented with the Distinguished Service Cross, the nation’s second highest award for valor, during a ceremony at Soldiers and Sailors Memorial Hall and Museum in Pittsburgh’s Oakland neighborhood — near the University of Pittsburgh — as family, fellow Soldiers, city officials and veterans watched.

“I am so honored … I am so proud of all my son accomplished,” said Freddie Jackson, Booker’s mother. “I didn’t realize how much my son did and how he inspired other people. Steve died for his country, not just for the Booker Family,” she said.

Booker died on April 5, 2003, while serving as a tank commander with Company A, 1st Battalion, 64th Armor of the 3rd Infantry Division. The 34-year-old Apollo, Penn., native was killed in action near Baghdad while serving in Iraq during the “Thunder Run” mission as part of Operation Iraqi Freedom. Booker attended Apollo-Ridge High School, near Pittsburgh, and enlisted in the Army in June 1987, at age 19, shortly after his high school graduation. He was promoted to Army staff sergeant in February 2001 and deployed in March 2003 to Iraq.

“We’re here to honor his service, his sacrifice and his heroism … as well as his Family” said U.S. Army Forces Command Deputy Commanding General Lt. Gen. Laura J. Richardson. “He gave his life for something bigger than himself; he gave his life for others. He’s a Pittsburgh hero, an Army hero and an American hero.”

Veterans of Booker’s unit also travelled from across the United States to attend the medal-presentation ceremony, organized by the U.S. Army 3rd Infantry Division, based in Fort Stewart, Ga. The Army ceremony honored Booker for his heroic actions, personal dedication, and commitment to his fellow Soldiers.

Booker’s platoon led a task force on April 5, 2003, along Highway 8 towards Bagdad International Airport. About 1.2 miles after the line of departure, the platoon came under heavy small arms and rocket-propelled grenade fire from enemy forces. Booker immediately communicated the situation to his chain of command, encouraged his crew, and returned fire with his tank-mounted machinegun. 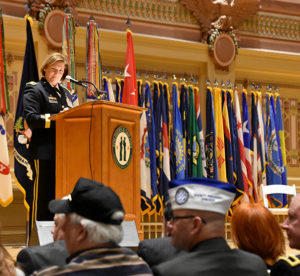 “When both his and his crew’s machineguns malfunctioned, Booker, with total disregard for his personal safety, exposed himself by lying in a prone position on top of the tank’s turret and accurately engaged the enemy forces with his personal weapon,” according to the award’s summary. “While exposed, he effectively protected his platoon’s flank and delivered accurate information to his command during a critical and vulnerable point of the battle.”

Booker’s “fearless attitude and excitement over the communications network inspired his platoon to continue the attack and assured them and leadership that they would defeat the enemy and reach their objective safely,” the award’s narrative explains. “As he remained exposed, Booker identified an enemy troop carrier which was attempting to bypass his tank, but within seconds engaged the enemy vehicle and destroyed it prior to the enemy troops dismounting. Along the five-mile route he remained exposed and continued to engage the enemy with accurate rifle fire until he was mortally wounded.”

Army Col. Andrew Hilmes, Booker’s former company commander in Iraq, said the heroic staff sergeant prepared his crew well for that day’s battle. “His ability to train his Soldiers saved a lot of lives. Not just his actions on April 5, but the training he put his Soldiers through prior to the 5th of April paid off for the unit.”

Booker’s sister echoed their mother’s comments during a media conference attended by Pittsburgh-area news media prior to the awards ceremonies, which included a plaque dedication in the Soldiers and Sailors Memorial’s Hall of Valor. “He’d be very proud. He’d probably be pumping his chest right about now,” said Booker’s sister Kim Talley-Armstead. “It’s a bittersweet moment, but we are extremely proud.”

After giving careful consideration and reviewing the recommendations from the Senior Army Decorations Board, Army officials said, the Secretary of the Army made the determination that Staff Sgt. Booker be awarded the Army Distinguished Service Cross. In recognition of their gallantry, intrepidity and heroism above and beyond the call of duty, 12 Soldiers recently received the Distinguished Service Cross, the nation’s second highest award for their valor.

Previously recognized for their bravery by awards of the Silver Star, the Department of Defense upgraded the Soldiers’ medals as part of a 2016-2018 comprehensive review of commendations for heroism in Iraq and Afghanistan. Four Soldiers are still on active duty; three are posthumous awards; three recipients have since retired and two recipients previously separated from the Army.