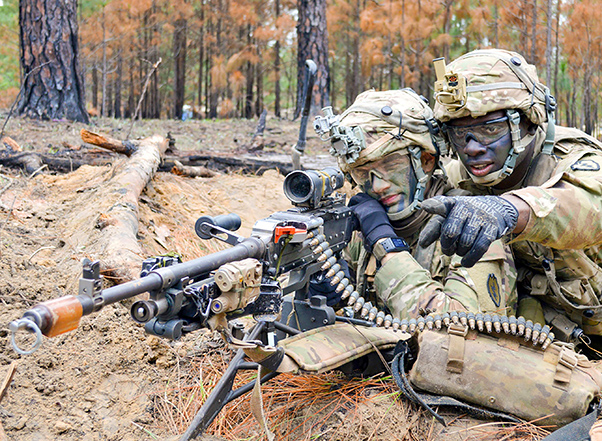 At $182.3 billion, the proposed fiscal year 2020 budget shifted funds to support 32 CTC rotations, four of which will go to National Guard units — twice as many as in recent years.

Efforts to extend One Station Unit Training from 14 to 22 weeks for combat arms Soldiers will also continue. Besides extensive training on weapons, the new OSUT increases medical skills allowing graduates to come out certified as emergency medical technicians.

“It’s now, I like to say, the longest and toughest in the world,” said Army Secretary Mark T. Esper about infantry OSUT while testifying before the House Appropriations Committee’s defense subcommittee on Capitol Hill.

Prepositioned stocks, which include equipment like fighting vehicles and tanks in Europe, South Korea and other locations around the world, see a boost as well as other readiness initiatives.

“We’re looking at some adjustments based on what the National Defense Strategy tells us to do to make sure we are in locations that allow us the highest degree of readiness should a conflict happen,” Esper said.

By 2022, the Army expects to reach its highest levels of readiness in at least 66 percent of its regular Army and 33 percent of Guard and Reserve units.

“With continued, consistent, predictable Congressional support, we can reach those levels of readiness,” said Army Chief of Staff Gen. Mark A. Milley.

Much of the budget is geared toward the Army’s six modernization priorities after senior leaders freed up $30 billion over five years from nearly 200 legacy programs.

“In short, this budget will increase the Army’s lethality in the near term and set conditions for increased lethality of the Army in the future,” Milley said.

“We are a fires-based Army,” Milley said. “In order to gain freedom of maneuver, you have to have fires and movement.”

“All of those programs in combination, both the acquisition piece of it and the fires piece of it, will reestablish U.S. dominance in fires” Milley said.

The Army plans to invest $1.2 billion over the next five years toward a hypersonic weapon, which is being developed in collaboration with the Air Force and Navy. 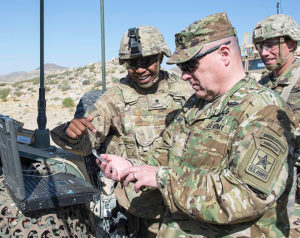 Army Chief of Staff Gen. Mark A. Milley, center, speaks with Spc. Steve McAdoo of the 780th Military Intelligence Brigade about cyber tools during a rotation at the National Training Center at Fort Irwin, Calif., May 9, 2017. The proposed fiscal year 2020 budget shifted funds to support 32 CTC rotations, including several at NTC and other training centers.

A flight test of a land-based hypersonic missile, which can travel five times the speed of sound, is expected in fiscal 2023, Esper said.

“It’s a game-changer,” he said. “It is a very difficult system to defend against due to its maneuverability and due to its speed and profile.”

To speed up the time it takes to get new technology in Soldiers’ hands, the Army is moving from an industrial-based model to one that is more tailored to its needs.

Last summer, the Army Futures Command was stood up as part of the Army’s largest reorganization in decades to oversee modernization efforts. The command’s cross-functional teams are now streamlining an outdated acquisition process to quickly procure new gear.

An example of how the Army may buy equipment in the future is the next-generation squad weapon. Only about 100,000 of those rifles — enough for roughly 10 percent of the total force — will initially be purchased for Soldiers who engage in close-quarters combat, Milley said.

“By the time you field an entire Army, that may be 10, 20, 30 years and that technology is no longer valid for the original need, but yet we keep buying it,” the general said. “We’re shifting to a different acquisition and procurement model.”

With the emergence of near-peer threats, the secretary said the Army must start moving on these new technologies and continue those efforts with consistent funding.

“This is not a one-year fiscal 2020 and we’re done,” he said. “It’s going to occur for many, many years to shift this big ship called the U.S. Army to where we need to be.”