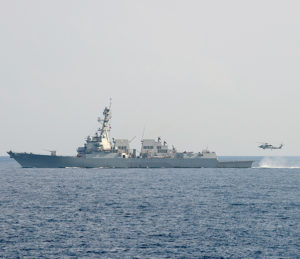 “The U.S. Navy is committed to engaging with regional partners in establishing common practices and developing mutual capabilities. Spruance is proud to exercise alongside the Indian Navy,” said U.S. Navy Cmdr. Matthew Smidt, commanding officer of USS Spruance. “We were greatly impressed by the professionalism and competency of their MPRA. The exercise was a wonderful experience and opportunity from which we learned and honed our skills.”

Spruance, based in San Diego, and P-8A aircraft from Patrol Squadron (VP) 8 “Fighting Tigers,” based in Jacksonville, Florida, are conducting routine operations in 7th Fleet. The Indian Navy P-8I aircraft is with Naval Air Squadron 312 based at Indian Naval Station Rajali.

“Flying ASW (anti-submarine warfare) in the 7th Fleet AOR (area of opeartions) is a team event and we eagerly seize every opportunity to work with our allies and partners,” said Lt. James Lowe, pilot with VP-8, said.  “Our goal is to further standardize our procedures so we can work more efficiently in future real world operations.  I think, in the end, we are fortunate to be able to operate out of beautiful Diego Garcia and learn about our Indian counterparts as well!” 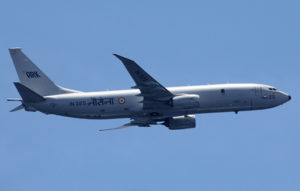 An Indian navy P8I Poseidon aircraft conducts a low altitude fly-by alongside the guided-missile destroyer USS Spruance (DDG 111) during a bilateral anti-submarine warfare exercise with the Indian navy in the Indian Ocean, April 15, 2019.

U.S. Navy ships and aircraft train routinely with the Indian Navy between annual port visits and exercises like Malabar.   These events reaffirm a shared commitment to a free and open Indo-Pacific.

“We look forward to developing useful lessons through this engagement and laying the groundwork for future integration efforts between our Maritime Patrol and Reconnaissance Forces,” said Cmdr. Zachary Stang, VP-8 commanding officer, said.

U.S. 7th Fleet provides security alongside allies and partners throughout a free and open Indo-Pacific. As the U.S. Navy’s largest forward-deployed fleet, 7th Fleet operates roughly about 50-70 ships and submarines, and 140 aircraft with approximately 20,000 Sailors.