Stratolaunch, the world’s largest airplane, took to the air for the first time April 13, following more than eight years of development at California’s Mojave Air and Space Port, 70 miles north of Los Angeles.

“What a fantastic first flight,” said Jean Floyd, CEO of Stratolaunch. “Today’s flight furthers our mission to provide a flexible alternative to ground launched systems. We are incredibly proud of the Stratolaunch team, today’s flight crew, our partners at Northrop Grumman’s Scaled Composites and the Mojave Air and Space Port.”

Formally known as the Model 351 the airplane was built at Mojave by Northrop Grumman subsidiary Scaled Composites, which has produced numerous revolutionary aircraft and spacecraft designs. The Stratolaunch has a high-wing, twin-fuselage configuration with two separate tail booms. Although each nose section appears to have its own cockpit, the three-person crew only occupies the right one. The left-hand compartment is reserved for electronics and instrumentation. Each fuselage assembly is 238 feet long. The tip of each vertical tail fin towers 50 feet above the ground. Company engineers nicknamed it the “Roc” after a giant mythological bird most widely known for its ability to snatch and carry an elephant with its talons.

At 385 feet, the Roc’s wingspan is the longest of any airplane ever assembled, stretching more than the length of an American football field, including end zones. A reinforced center wing section provides space for pylons to carry a variety of launch vehicles, such as the Pegasus XL. With a mission radius of 1,000 nautical miles and a 550,000-pound payload capacity, Stratolaunch could carry up to three Pegasus rockets on a single flight, or one larger launch vehicle.

For increased structural strength and overall weight reduction, the airframe was constructed mostly of carbon fiber composite materials instead of conventional aluminum alloys. The Model 351 weighs more than 550,000 pounds and is designed to sustain a maximum gross operating weight of approximately 1.3 million pounds.

To save money and reduce risk, designers used as much off-the-shelf hardware as possible. The jet is powered by six Pratt & Whitney turbofan engines salvaged from two Boeing 747 airliners and also employs landing gear from the 747. To safely accommodate high operating weights there are 28 wheels in total, two each for the twin nose gear assemblies and the rest distributed across six main gear trucks with four wheels each. Additional components from the 747 include cockpit windows, avionics, and control system actuators.

The maiden flight followed a series of ground checkouts and taxi tests earlier this year. The much-anticipated takeoff from Mojave was flawless and the Roc was soon circling the sparsely populated desert region between Ridgecrest and Tehachapi. During the 2.5-hour shakedown, Scaled Composites test pilots Evan Thomas and Chris Guarente achieved a maximum speed of 189 miles per hour while climbing as high as 15,000 feet. As is typical during such tests, the landing gear remained extended throughout the flight. The crew landed the giant plane safely after conducting a standard series of flying qualities and handling maneuvers. 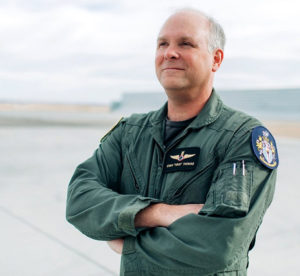 “For the most part, the plane flew as predicted,” said Thomas, a former Air Force fighter test pilot. “I honestly could not have hoped for more on a first flight, especially of an airplane of this complexity and this uniqueness.”

Sadly, Paul Allen passed away only six months before his dream took flight. “We finally did it,” said Floyd at a postflight news conference. “I had imagined this moment for years, but I had never imagined it without Paul standing next to me,” he added.

“Even though he wasn’t there today, as the plane lifted gracefully from the runway, I did whisper a ‘thank you’ to Paul for allowing me to be a part of this remarkable achievement,” he said.

Many more test flights will be required to check and verify aircraft performance, and Stratolaunch still needs to be certified by the Federal Aviation Administration. If all goes as planned, the first satellite launch from the giant craft could occur sometime next year.