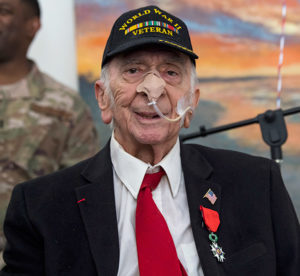 George Aigen was bestowed the highest honor in France: induction into the French Legion of Honor as a knight, or chevalier, April 11, 2019, in Valdosta, Ga.

“More than 70 years ago, George Aigen risked his young life for the freedom of France and Europe,” said Louis de Corail, Consul General of France in Atlanta, who presented Aigen with the medal.

“France is what it is today, a free and sovereign country, thanks to the bravery of such veterans and thanks to the [United States]. We are now decades away from World War II and yet we still pay homage to veterans, the legacy of their courage and the fight for freedom in a time darkness and despicable ideologies came to power in Europe.”

In recent years, France made a special provision to honor all American veterans who risked their lives on French soil from June 6, 1944 to May 8, 1945, Aigen being one of them.

In April 1945, as a 19-year-old Army corporal, Aigen fought alongside other soldiers in 1269th Combat Engineers Company B and was part of the group who liberated Dachau, the first concentration camp built by the Nazis in 1933. 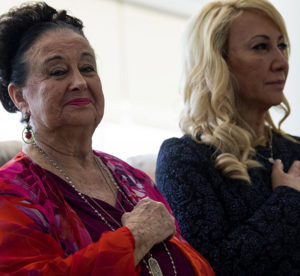 Joyce Aigen, left, and her daughter Judy Hathcock, stand for the national anthem, during a pinning ceremony, April 11, 2019, in Valdosta, Ga.

In a previously recorded video interview, Aigen recounted what happened as they approached Dachau, “As I approached the gate, I was a 19-year-old corporal with a rifle in my hand. When we went up to the gate there was hellish chaos.

“Everybody was looking for help, they were starving and in very bad shape. We brought in medical help, food and water, and helped as many as we could. Coming face-to-face with it, seeing it eye-to-eye … it was hell on earth. I always said the war was hell, but this is one step further.”

During the ceremony, the crowd reflected on the heroic and selfless actions of Aigen and all of the veterans who fought in the war and had a hand in the liberation of France.

There are approximately 93,000 current Legion of Honor recipients, and for American veterans to qualify, they must have fought in one of the four main campaigns of the Liberation of France in Normandy, Provence, Ardennes, or Northern France. 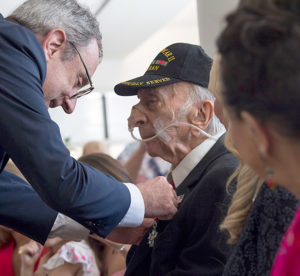 Louis de Corail, Consul General of France in Atlanta, pins the Legion of Honor medal on George Aigen during a ceremony, April 11, 2019, in Valdosta, Ga.

Although Aigen’s actions qualified for the Legion of Honor, the process was not automatic. At an after-hours work event in 2016, Aigen and his wife Joyce met Dr. Christine LeClerc-Sherling, a local college professor, who submitted the application.

Within five days, the application was sent to the local consulate. From there, the two year journey began with the application traveling to the embassy in Washington D.C. then to Paris to be vetted. Ultimately, the official decree was signed by the President of the Republic of France, March 15, 2019.

“At the time we thought it would be a four to 10-month process, but I can tell you that after these years, me and family are the most blessed from that wait,” LeClerc-Sherling said. “Being around George and Joyce has influenced my family so much. It made me a better citizen, a more committed family member and definitely a more loyal friend.

“George and Joyce are absolutely everything that is right with this world.”