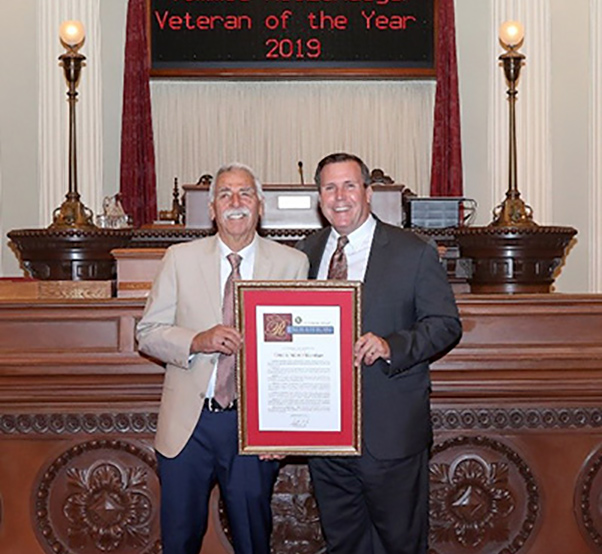 “It was a real pleasure to publically recognize a veteran who has not only served our country in the military, but continues to serve our local veterans.  Tom Hilzendeger is a living example of the difference once person can make in the world,” said Wilk. “He served our nation honorably in the Vietnam War and works tirelessly for our veteran community today.”

Hilzendeger served in the U.S. Army from 1968-1970. During his service, he earned the National Defense Service Medal, Vietnam Service Medal, and the Vietnam Campaign Medal. After returning from Vietnam, he worked at the Los Angeles County Sanitation District until his retirement. After retirement, Tom participated in a PTSD group at his local Veterans Center, where he was inspired to begin his ‘second career’ and passion — serving our veteran community.

Hilzendeger started Vets4Veterans after sponsoring a car show to raise money for veterans in need. Vets4Veterans, a nonprofit organization based in the Antelope Valley, assists any veteran who needs help — whether it is medical, dental, pursuing an education, or assistance with a living situation. Vets4Veterans is dedicated to providing support to those readjusting to civilian life. Last fall, the organization broke ground on Operation Restart, a transitional housing program. Hizendeger’s dream for Operation Restart is to have multiple homes where veterans and their families can live rent free for up to a year while they look for housing that is more permanent.

“It was a surprise to be chosen for this award. I believe serving my fellow veterans is just part of doing what is right,” said Hilzendeger. “Thank you to Senator Wilk for this honor and for helping bring attention to the very real needs of the young men and women returning stateside after serving our nation.”