In this tweet, Trump said “I am pleased to announce that Christopher C. Miller, the highly respected Director of the National Counterterrorism Center (unanimously confirmed by the Senate), will be Acting Secretary of Defense, effective immediately. Chris will do a GREAT job! Mark Esper has been terminated. I would like to thank him for his service.” 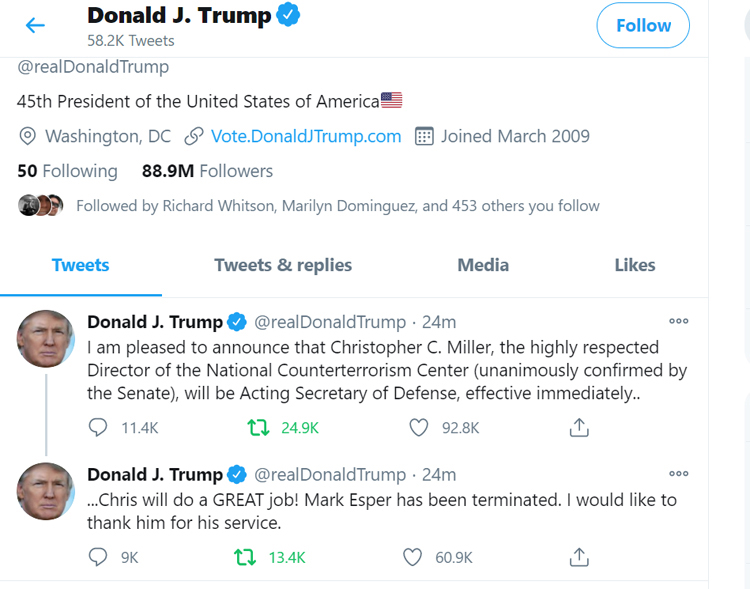 Miller was confirmed as head of the National Counterterrorism Center on Aug. 10, 2020. He previously served as deputy assistant secretary of defense for special operations and combating terrorism. While on active duty, Miller served in Afghanistan in 2001, and Iraq in 2003.

There had been speculation that Trump would fire Esper after the election, whether he won a second term or not.

Esper has been at odds with Trump since the summer when he pushed back against the president’s plan to use active duty troops to squash protests around the United States, as well as Esper’s reluctance to withdraw troops from overseas engagements under the timelines Trump wanted.

Esper also clashed with Trump on changing the names of U.S. military bases for Confederate generals something Esper supports and Trump does not.

The change at the top of the Pentagon comes at a crucial time as the United States and the world prepares for the transition of power from the Trump Administration to a future Biden Administration.