For more than 50 years, Snoopy has contributed to the excitement for NASA human spaceflight missions, helping inspire generations to dream big.

NASA has shared an association with Charles M. Schulz and Snoopy since Apollo missions and continues under Artemis with new educational activities. Up next — Snoopy will ride along as the zero gravity indicator on Artemis I.

Artemis I is an uncrewed flight test of the Space Launch System (SLS) rocket and Orion spacecraft around the Moon launching in early 2022 before missions with astronauts. Zero gravity indicators are small items carried aboard spacecraft that provide a visual indicator when a spacecraft has reached the weightlessness of microgravity. Without astronauts aboard Orion, Snoopy will help share the journey with the world as he rides along in the cabin with a manikin and two other “passengers.” 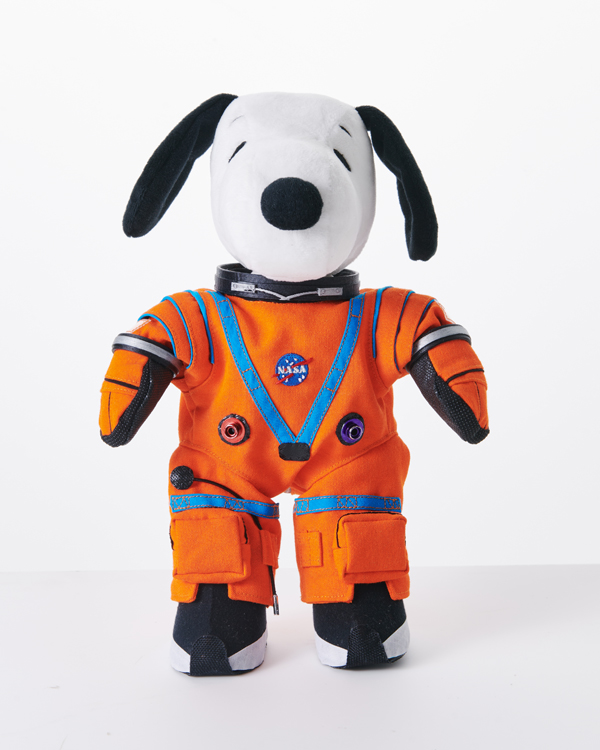 Already a well-known household character, Snoopy was used to encourage NASA’s spaceflight safety initiative during the time of Apollo. Schulz created comic strips of Snoopy on the Moon, capturing public excitement about America’s achievements in space.

In May 1969, Apollo 10 astronauts Gene Cernan, John Young and Thomas Stafford traveled all the way to the Moon for one final checkout before the lunar landing attempt. The mission required the lunar module to skim the Moon’s surface to within 50,000 feet and “snoop around” scouting the Apollo 11 landing site, leading the crew to name the lunar module “Snoopy.” The Apollo command module was labeled “Charlie Brown,” after Snoopy’s loyal owner. Snoopy’s first flight to space was in 1990 when he was able to catch a ride on the space shuttle Columbia during the STS-32 mission.

The agency’s Silver Snoopy award was created during the Apollo era and remains to this day. It is a high honor awarded to NASA employees and contractors by astronauts, celebrating achievements related to mission success and human flight safety. Each silver pin given with this award, depicting astronaut Snoopy, was flown in space. Continuing the tradition, Artemis I will also carry a package of silver snoopy pins for future recognitions.

In 2019, NASA and Peanuts Worldwide celebrated the 50th?Anniversary of the launch of Apollo 10 and the history of their partnership in NASA’s safety and human space flight awareness program. Leading up to the anniversary, NASA and Peanuts collaborated on STEM activities, a mini-documentary and other new products that share the excitement of science, technology, engineering and math with the next generation of explorers. The collaboration, formalized though a Space Act Agreement, provided an opportunity to update Snoopy’s spacesuit and introduce new space-themed programming with content about NASA’s deep space exploration missions, 50 years after the initial collaboration began during the Apollo era.

Under the anniversary collaboration, NASA provided support for a number of new Peanuts programs that focused on modern-day astronaut Snoopy and space themes, including a STEM-based curriculum for students in kindergarten through 5th grade about America’s deep space exploration objectives. NASA centers across the nation joined the celebration as well with local exhibits or STEM activities capitalizing on the Apollo 10 mission’s unique call sign for the Lunar Lander of Snoopy. Snoopy also participated in the celebration on the National Mall in Washington to celebrate the 50th Apollo 11 Moon landing, which also took place in 1969.

Astronaut Snoopy was featured as a balloon in the 2019 Macy’s Thanksgiving Day Parade and as a plush doll floating aboard the International Space Station. During coverage of the holiday celebration, NASA astronauts Jessica Meir and Christina Koch delivered a message alongside Snoopy from aboard the space station, highlighting the partnership along with the 20th anniversary of continuous human presence on station, which is helping prepare future exploration with Artemis.

Astronaut Snoopy launched to the station aboard a Cygnus spacecraft on Northrop Grumman’s 12th cargo resupply mission. In the parade and on the space station, Snoopy sported a spacesuit modeled after NASA’s Orion Crew Survival System, which is worn by astronauts while inside the Orion spacecraft on Artemis missions to the Moon. The Astronaut Snoopy balloon will appear again in the 2021 Macy’s Thanksgiving Day Parade. 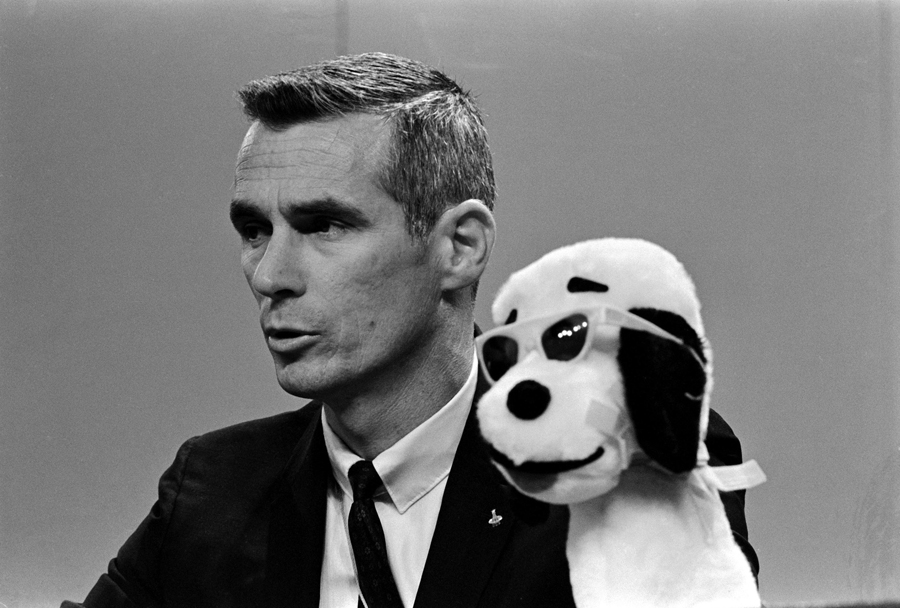 Today, the partnership continues. For Snoopy’s flight on the Artemis I mission, he will be outfitted in a custom orange flight suit complete with gloves, boots, and a NASA patch. Peanuts is releasing a new suite of curriculum and short videos with its partner, GoNoodle, to encourage kids to learn about gravity, teamwork, and space exploration while they follow Snoopy along on his Artemis I journey. In addition to the doll and Sliver Snoopy pins, a pen nib from Charles M. Schulz’s Peanuts studio will make the trek on Artemis I wrapped in a space themed comic strip as part of a collection of mementos selected by NASA to fly aboard the Orion spacecraft. A new season of “Snoopy in Space” will also be released on Apple TV+ that explores the planets and what conditions are necessary to find life in the universe. NASA supported Peanuts with the series through reviews of STEM content and NASA mission information.

Under Artemis, NASA is working to land the first woman and the first person of color on the Moon and lead the next steps of human exploration for future missions to Mars. Artemis I will pave the way for a series of increasingly complex missions to establish a long-term presence at the Moon.