For more than a century, trailblazing pilots like Eugene Bullard, Emory Malick and Bessie Coleman have contributed to the advancement of the aviation industry, diversifying the skies as some of the world’s first Black pilots.

While these pioneers symbolize how Black aviators broke countless barriers, Black pilots only represent 3.4 percent of the country’s aircraft pilots, with women representing only 5.6 percent. Black women represent less than 1 percent of that total, according to 2020 data from the U.S. Bureau of Labor Statistics.

In honor of Black History Month, we’re recognizing three Collins Aerospace employees — Gabby Howell, DeWayne Rittenhouse, and George Anyanwu — who followed their dreams of becoming pilots, pursued careers in the aviation industry and continue to inspire the next generation of Black pilots.

Gabby Howell could fly a plane before she could drive a car. At 14, she completed the Experimental Aircraft Association’s Young Eagles program, which introduces young people to aircraft construction and the fundamentals of flight. She officially received her pilot license at 17.

Inspired by her father’s love for aviation, Gabby became the first person in her family to become a pilot.

“It’s the art of flying that I love,” said Howell. “I always knew there weren’t many female pilots, especially Black women. I knew I was entering a field where seeing someone who looked like me was rare. It was very intimidating, but I was willing to take on the challenge and took to the skies. I wanted to show other Black women that becoming a pilot is an option for them and I believe all women can do extraordinary things.”

For Gabby, the journey to becoming a pilot was about having the right skills and knowledge. Once she completed her training, she received a scholarship from the Georgia Business Aviation Association and earned an associate degree in aeronautics from Embry-Riddle Aeronautical University.

Today, Gabby’s love for planes fuels a career in aviation at Collins Aerospace, a business of Raytheon Technologies.

“I chose to work with Collins Aerospace because it is a wonderful company. We do excellent work in the field I love so much,” she said. “Joining this team was a huge step toward achieving my dream of pursuing opportunities in aviation.” 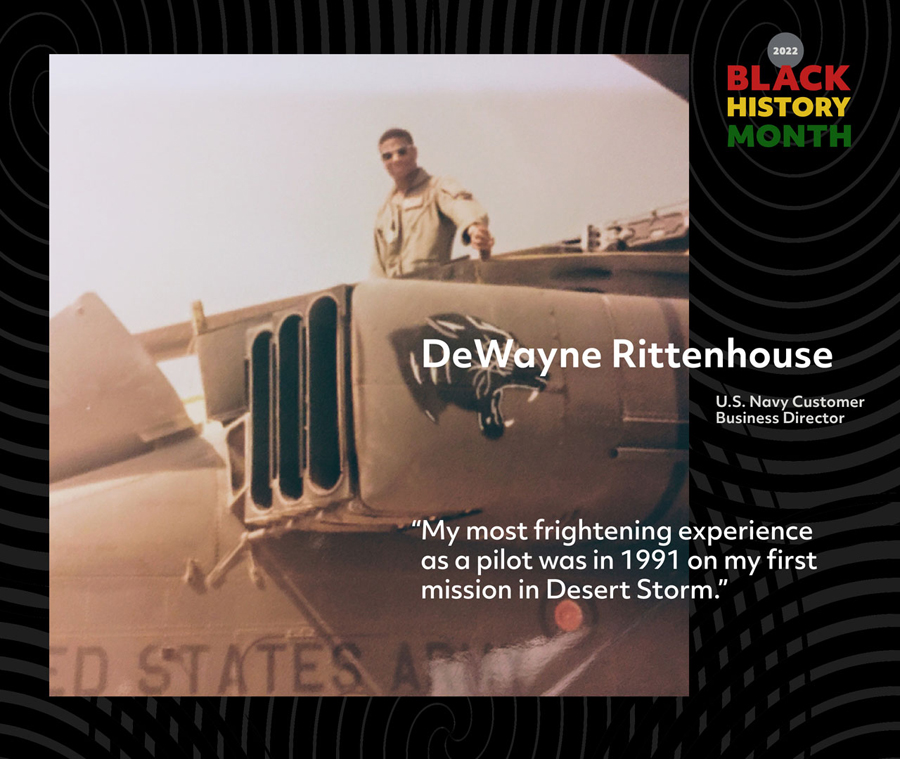 “If you want to challenge yourself in the Army, become a pilot.”

These words from a retired Vietnam veteran changed the course of DeWayne Rittenhouse’s military career and encouraged him to become a U.S. Army helicopter pilot.

DeWayne — a U.S. Navy customer business director at Collins Aerospace — originally joined the U.S. Army in 1985 as an M60A3 tanker in the 2nd Infantry Division in South Korea and was later named Division

Soldier of the Year. Four years later, he graduated from flight school and completed two additional overseas tours in Germany and Saudi Arabia as an AH-64A Apache helicopter pilot.

“On a mission in 1991 as part of Operation Desert Storm, I had dual engine failure and was forced to land in enemy territory, said Rittenhouse. “We were about 50 feet above the ground,” he recalled. “I don’t remember looking at the instruments — just adjusting the flight controls to keep the airspeed up enough to make a shallow landing on the desert floor. Luckily, my former flight instructor recognized our downed aircraft and issued a recovery team for support.”

As one of the few Black military pilots, he often felt the pressure to not only succeed, but to be the best. That desire to excel remains with him today, as he encourages other people of color to explore Army aviation. He also has inspired his nephew, who is about to begin training to become a military aviator. 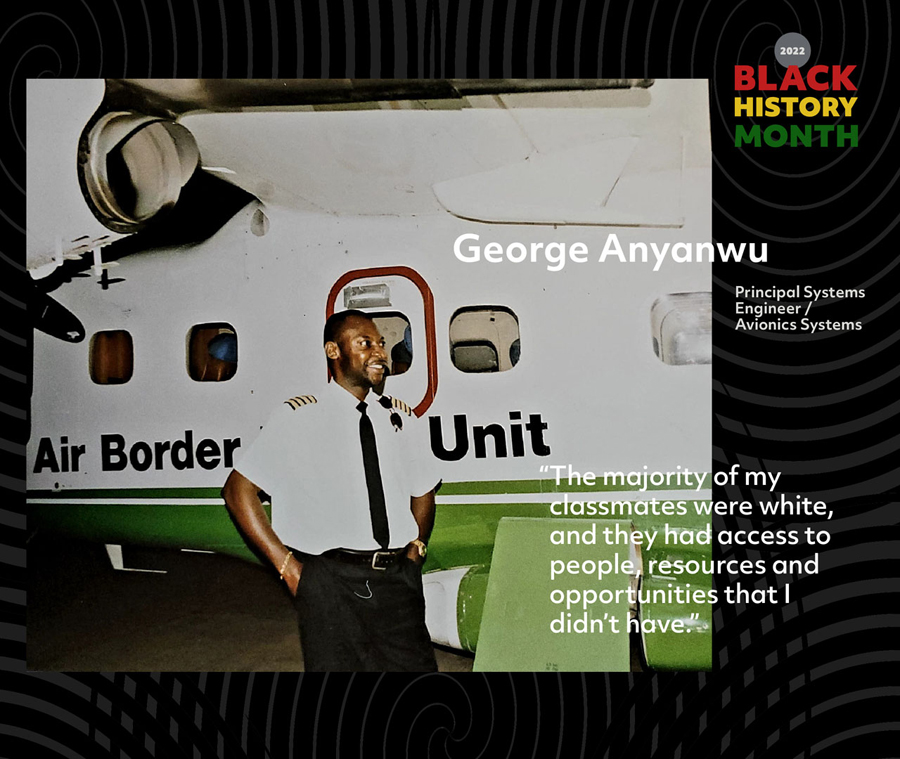 George Anyanwu was just five when he discovered his love of aviation. He spotted a plane in the sky, and today, his curiosity about that aircraft has led him halfway around the world from his hometown in Mbaise, Nigera.

After high school, he applied to the Nigerian College of Aviation Technology, the first air training institute in Nigeria, and was one of two candidates from his home state selected to attend the institution. There he completed three years of training, but he was forced to look elsewhere to earn his license due to a shortage of fuel and other resources in Nigeria.

He moved to California and enrolled in a local flight school where he earned his commercial pilot license. However, even with his training complete and his license in hand, he struggled to find employment while his classmates’ careers were taking off.

“The majority of my classmates were white, and they had access to people, resources and opportunities that I didn’t have,” said Anyanwu. “I even looked for jobs that allowed me to fly passengers and supplies free of charge, but I couldn’t even get those opportunities. After years of trying to secure a job, I moved back to Nigeria and immediately received a job opportunity with Dornier Aviation.”

For nearly four decades, George has enjoyed the thrill of flying, now a principal engineer, today he flies for fun in Cedar Rapids, Iowa, with the Collins Aerospace Employee Flying Club. This summer, he’ll pass his love of flying to his two teenage daughters when he invites them to be his co-pilots for the first time.