In the last issue, we shone a light on the unsung Air Force heroes called the Missileers. We looked at the environment they served in, and the years of challenges they faced performing their tasks deep underground, waiting for an event they hoped and prayed would never happen.

All the branches of the military have their unsung heroes who perform the tasks and serve the missions that rarely get recognition but are just as important to our country’s safety as those called “the tip of the sword.”

In the Air Force and now in the newly formed Space Force, the Missileers are a select group of individuals assigned or volunteering to live life in the shadows and not discuss their service. They perform readiness tasks so at a moment’s notice and after years of waiting, the systems will perform flawlessly. The men and women who do this maintenance also need to perform flawlessly. Thus, we look at individuals at the consoles and behind the scenes making up the crews that constantly rotate in and out of those launch facilities year after year.

Being from an Air Force family, I had the opportunity to experience the Missile Man firsthand as my older brother, an Air Force career man, served in this capacity pretty much his entire service. As I always looked up to my big brother, it wasn’t until my Air Force years came along that I really understood just what his life was like, and why his visits home were very different from others in the military who didn’t call the silo complex home.

Gary was a quiet man but never short of opinions, and I was blessed to be his little brother, born many years later when he was in high school. I was that surprise change-of-life baby nobody expected in our home. To Gary, I was more entertainment than baby, and he spoiled me rotten with attention. Not much else was going on in 1950s Antelope Valley, and we became very close. I remember how carefree he was and how many times he would take me to his part-time job working for a local veterinarian. I would sit with him as he did stacks of paperwork while keeping me entertained. Then one day after he graduated, that all came to an end as we stood in a light fog at a San Bernadino train station. I watched him turn and wave as he entered the waiting train, taking him to whatever the military would make of him.

“The Missileers” was written many years ago by Capt. Robert A. Wyckoff, and best describes the future that awaited my brother.

“In vacant corners of our land, off rutted gravel trails,

There is a watchful breed of men, who see that peace prevails,

For them there are no waving flags, no blare of martial time,

There is no romance in their job, no glory at high noon.”

As I grew up, Gary would visit on occasion, and little did I know that his trips to Lancaster were just a side trip. He was spending time at Vandenberg Air Force Base where he and his fellow Missileers would come and hone their skills in mock drills and live firings of unarmed Minuteman missiles.

He would come home for weekends and was back at it on Monday, then it was back to his mission somewhere in the plains across America. Not much was ever said about his mission, and I could see the change in his demeanor over the years as the pressures of the job exacted their own price in a way that all who serve in combat understand.

“In an oft’ repeated ritual, they casually hang their locks,

Where the wages of man’s love and hate, are restrained in a small red box

In a world of fiick’ring colored lights, and endless robot din,

The missile crews will talk awhile, but soon will turn within.

To a flash of light or worldly tone, conditioned acts respond,

Behind each move, unspoken thoughts, of the bombs that lie beyond.

They live with patient waiting, with tactics, minds infused,

And the quiet murmur of the heart, that hopes it’s never used.

They feel the living throb, of the mindless tool they run,

They hear the constant whir, of a world that knows no sun.

Here light is ever present, no moon’s nocturnal sway.

The clock’s unnatural beat, belies not night or day.”

Like so many families across America with a loved one on standby, we can only imagine the mindset of those who lived this life of service to the citizens of the United States.

During the Vietnam War, the photos and the lists of names were a constant reminder as to the price of war on the American family, but one thing Gary said to me in a rare exchange some years later has always stuck with me. When he spoke of the simple task of riding an elevator and when the door would close. Most of those rides were uneventful but on occasion, when the problems of the world were in the headlines, it was always a thought that looking at the open fields and blue skies as the doors shut that they may not be there if by some tragic reason the keys are turned and the world and the America we know would no longer be home for us to return too, it would be the remains of society that had lost everything.

The last part of Captain Wyckoffs poem sums it up:

“Behind a concrete door slammed shut, no starlit skies of night,

No sun-bleached clouds in azure sky, in which to dance in flight.

But certain as the rising sun, these tacit warriors seldom see,

They’re ever grimly ready, for someone has to be.

Beneath it all they’re common men, who eat and sleep and dream;

But between them is a common bond, of knowledge they’re a team.

A group of men who love their land, who serve it long and well,

Who stand their thankless vigil, on the brink of man-made hell.

In boredom fluxed with stress, encapsuled they reside,

They do their job without complaint, of pleasures oft’ denied.

For duty, honor, country, and a matter of self-pride.” 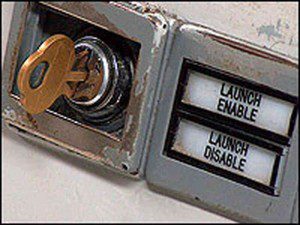 I miss my brother, who died some years back, and I find joy in interacting with his children and sharing my memories of those days of innocence, when the problems in the world did not interfere with love between brothers.

Gary, in those years down in the hole, did get that master’s degree offered to those who served in the SAC silos, and he went on to become a University of Arkansas professor after he retired from the Air Force.

My brother is no different than all of those serving today in the same capacity. As we celebrate the Armed Forces Day in May, ending with Memorial Day reflections and celebrations across the country, I just wanted to take this opportunity to shine a light on those who don’t get the headlines like those whose service is more dramatic. A line Gary once told me should make us all take a moment to understand the life of a Missileer: “In the field of combat, enemies face off each with a finger on a trigger and the enemy in their sights poised to engage, in our mission the enemy is sitting there as we stare down each other with bigger bullets and bigger triggers.”

God bless and protect all those past, present, and future who answer the call of our nation. And may we never forget the many in all branches of the military working jobs in the shadows never getting the recognition they should.

For me, I will just be happy with the memories of the little boy who looked up to his big brother who was his hero for all time.

Until next time Bob out!