Retired Chief Master Sgt. Harold Bergbower was born May 11, 1920, in Newton, Illinois. He joined the Army Air Corps May 12, 1939. One year later, he went to school at Chanute Field, Illinois, and became an air mechanic. In January 1940, he volunteered to go to the Philippines and stayed there for a year and a half. Everything was good until Dec. 8, 1941.

“We just got word that Pearl Harbor was bombed,” he said. “We also heard that Clark Field had been bombed as well, but we were on Clark Field at the time, so we thought it was a joke.”

Bergbower and other prisoners were taken by Japanese soldiers to a prison camp called Malaybalay after surrendering. After three months they were moved to the fields of Davao Penal Colony and then shipped to Japan to work as slave laborers. The arrows point to Japanese soldiers who joined the prisoners for a photo.

“After the first few bombs dropped, it was silent,” he said. “Seconds later came the impact, and I was hit. I remember waking up in the morgue at Fort Stotsenburg, about 80 km north of Manila. I crawled out of the morgue, went back to my squadron and went back to duty.”

Bergbower found out that his squadron was at Mindanao. With the help of the 26th Cavalry Regiment, he was able to rejoin his squadron. Although they fought with all their might, they were not victorious over the Japanese and had to surrender. Japanese soldiers took them to a prison camp called Malaybalay, which was in the northern part of Mindanao. They were there for about three months and then transferred to Davao Penal Colony, where they were forced to farm.

“We raised rice and learned how to use a caribou to plow in the fields and paddies,” he said. 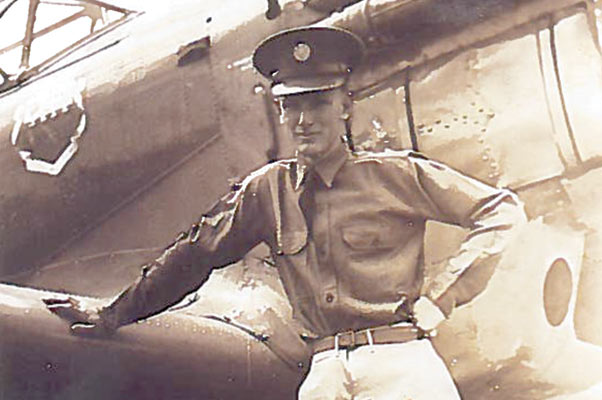 Late 1940 or early 1941 at Clark Field on Luzone Island in the Philippines.

Bergbower and other prisoners farmed the fields of Davao Penal Colony for about four months until the Japanese soldiers moved them to what they referred to as a “hell ship” and sent them to Japan to work as slave laborers.

“They packed us in that ship shoulder to shoulder, front to back,” he said. “You couldn’t even sit down. The ship ride was all a blur. I don’t remember anything until we landed in Japan, and that’s when everything came together.”

The unit was dropped at a warehouse to be hosed off. The Japanese took them to a steel mill where they worked until the war ended. 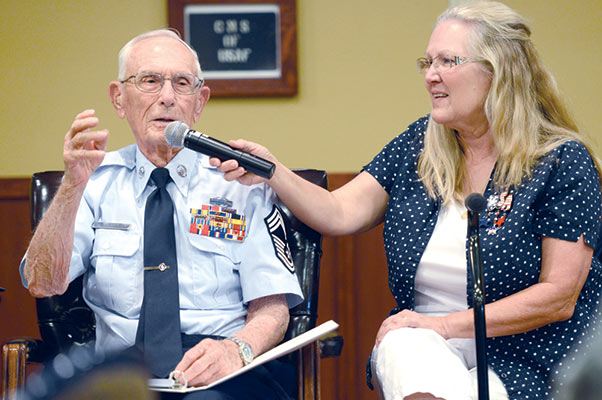 Debra Grunwald, daughter of retired Chief Master Sgt. Harold Bergbower, holds the microphone for her father when he spoke at a Focus 56 event in May 2014 on Luke Air Force Base.

“The way we found out the war had ended was when people from the Red Cross came into our camp and told us. ‘We have entered the atomic age,’ the Red Cross member said. ‘The atomic bomb had been dropped on Hiroshima and Nagasaki, and the Japanese surrendered.’”

The U.S. won the war, and the American prisoners were set free. Bergbower and his crew were sent to Tokyo on a hospital ship called The Rescue where they received treatment, hot meals and new clothes. The unit was able to send a telegram home. It went to a telegraph service in Canada where it was then delivered to his parents’ house by regular mail.

“My mother had received a letter and a telegram from the president about the death of her son Dec. 8, 1941,” he said. “It’s September 1945 and she gets this telegram saying I’m alive. Of course she went into shock, but the doctor took care of her.”

Bergbower came back to the states in October 1945. He took the train from San Francisco to Galesburg, Illinois, to Letterman General Hospital and from there he called his parents. He was released from the hospital and went back to his parents’ home in Decatur. 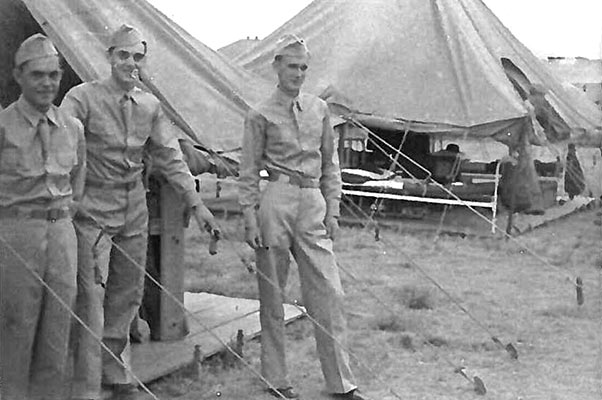 Late 1940 or early 1941 at Clark Field on Luzone Island in the Philippines.