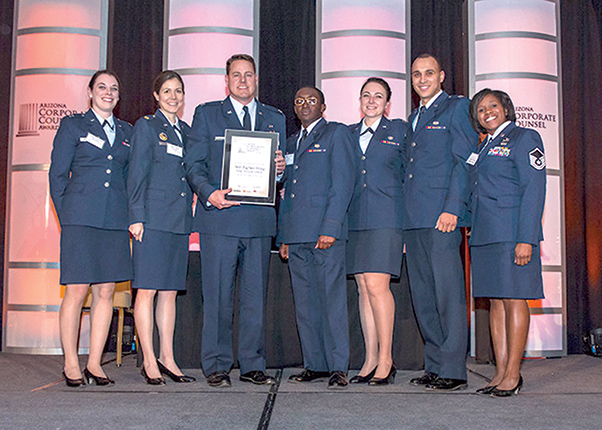 Jan. 14, before a sold-out crowd at The Camby/Autograph Collection Hotel (formerly the Ritz-Carlton), Az Business magazine recognized the important and vital role that in-house counsel plays in the success of a business with the Arizona Corporate Counsel Awards.
The 56th Fighter Wing Legal Office received the following award:
In-House Legal Department of the Year
The 56th FW Legal Office provides a wide variety of legal service to the more than 5,500 Airmen who serve at Luke Air Force Base in the West Valley. The top legal advisor is Lt. Col. Joel England, a graduate of the Air Force Academy in 1995 and the University of Arizona James E. Rogers College of Law in 2002. He oversees a legal office of 12 attorneys, 10 paralegals and three civilians. The team provides legal advice to the wing’s commander, Brig. Gen. Scott Pleus, and his staff, as well as the base population. They also assist military retirees and their dependents who have served in any of the five branches of the armed services.