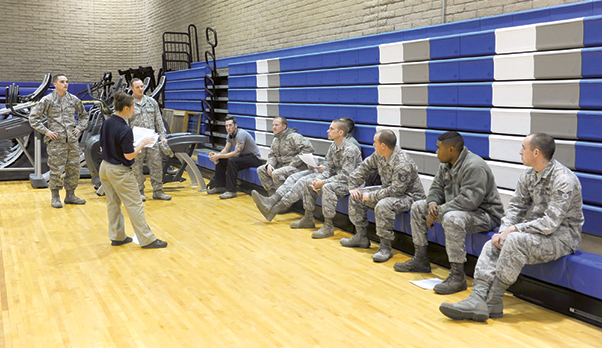 Coaches of the 2016 flag football tournament get together for a meeting Jan. 15 in the Luke Air Force Base Bryant Fitness Center gym. They discussed rule changes and schedules.

After dominating the 2015 Intramural Flag Football tournament in 2015, the 56th Logistics Readiness Squadron flag football coach attended the Winter Flag Football 2016 Tournament coach meeting Jan. 15 at Luke Air Force Base.
The participating flag football coaches were given bylaws for the purpose of establishing guidelines and operational procedures for the intramural flag football program.
“Coaches from each team gathered together to discuss future lineups,” said Benjamin Williams, 56th LRS traffic management journeyman and 2015 flag football coach. “Last year, we dominated both sides of the ball by stopping the other teams from scoring points by taking away their best players and forcing them to win another way.”
The LRS team overwhelmed 56th Component Maintenance Squadron with a final score of 20-18 earning them the 2015 championship title.
“LRS worked us in the finals last year, but this year we’re sticking together as a team and will capitalize on any advantages we get,” said Trevor Stark, 56th CMS egress journeyman and 2015 flag football coach. “We are coming out this year looking to win it all.”
With all teams fired up and ready to go, each coach glanced at the future lineups with a look of determination.
The first teams to throw down on the gridiron were 56th Equipment Maintenance Squadron ammo and 56th Medical Group Jan. 19. The score was 38-12 MDG. These teams set the tone for the rest of the 2016 tournament.
“We plan to employ the same tactics as last year,” Williams said. “But, we do wish the other teams the best of luck and hope we continue to dominate.”