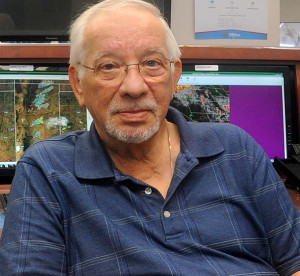 A civilian, with the 56th Operations Support Squadron weather flight at Luke Air Force Base, Ariz., is retiring after 52 years of combined military and federal service.

Ronald Presnal spent much of his life working in the weather career field at several bases, and saw many changes to his career field, before medical problems forced him to retire from the work he loves so much.

“I’d stay forever,” Presnal said. “I enjoyed my career at Luke, in fact I did not want to retire. It’s just that I’m getting older now, and with my handicap, it was time to go.”

Presnal began his career as a weather observer at England Air Force Base, Louisiana then deployed to Vietnam attached to the 25th Infantry Division. He returned to Otis AFB, Massachusetts and from there served at Mather AFB, Calif., the 8th Infantry Division in Germany, Plattsburgh AFB, N.Y., Chanute AFB, Ill., and Fort Campbell, Ky., before joining the combat weather team here at Luke.

Weather wasn’t always Presnal’s first love, in fact he had other aspirations before joining the Air Force.

“I wanted to be an astronomer,” Presnal said. “Then I found out all the maps that were involved. So I had to choose between joining the Air Force and going into the security police or weather, so I chose to be weather.”

Not a bad choice, for someone who has spent 52 years doing a job he loves to talk about. And like the weather, Presnal has seen many changes to his career field in those years.

“Everything has changed,” Presnal said. “The people have changed. The techniques have changed. This started in the late nineties and changed gradually, you really didn’t notice it.” 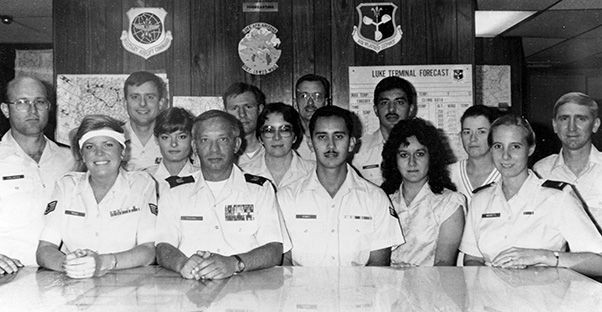 The way of collecting, analyzing and forecasting the weather all changed.

“Everything was done by hand before, and now everything is done with computers,” Presnal said. “All the weather charts were done by hand in color. Forecasters would put these charts on walls and analyze them, now they’re forecasted on a computer screen.”

Along with changes to how technicians communicate information, the amount of technicians needed to do the job has decreased and jobs are being supplemented by computers.

“We had twice as many people back then, because we had observers at the observation site and the weather station taking observations, plus forecasters and a weather station maintenance crew that could carry equipment,” Presnal said.

“We had three different sections, observing, forecasting and maintenance, now we don’t have any observers. The forecasters take observations and we have equipment on the runway that take the observations, so we actually don’t take any observations, unless something goes wrong with the equipment.”

Presnal, spent many years forecasting the many changes in the weather, but he couldn’t forecast what he describes as the “perfect storm” that’s began his retirement.

“Multiple myeloma and prostate cancer,” Presnal said. “It was like the perfect storm of medial things. I was in the hospital for five months. Doctors removed all my toes on my right foot and cut the tips off my fingers, because they were like sausages.”

Presnal, now out of the hospital, uses a wheel chair and a cane to get around, but that hasn’t stopped him from coming to work to check on his Airmen.

“I enjoy the kids, I always call them the kids, because they’re in their twenties and I’m in my seventies,” Presnal said.

After serving 52 years, it’s the things that have been the most important to him his whole career that Presnal is going to miss the most.

“I’m really going to miss the people, and the weather,” Presnal said. “In Arizona it’s challenging, so there is always something going on when it comes to work, it’s never the same.

A small ceremony to recognize Presnal’s years of service was held Sept. 28 in the 56th OSS building conference room.