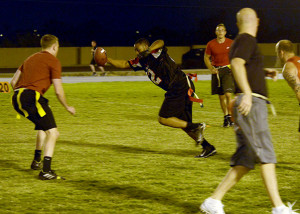 Along with the other twelve teams they played for the number one spot in the first weeks games.

“This season will be a good one,” said Jemia Fournier-Allen, 56th Force Support Squadron recreation aide. “All teams competing this year have top notch talent. I can’t wait to see who wins the championship.”

The top two teams coming out the first week are the 56th Force Support Squadron and 56th Component Maintenance Squadron, who both won their first games of the season.

Other teams to keep track of this season include the 56th Equipment Maintenance Squadron/Aircrew Ground Equipment and the 56th Communication Squadron who also are on an undefeated streak.

Even though FSS is a playoff contender and faces many tough competitors they are thinking positively and looking forward to bringing the championship home. 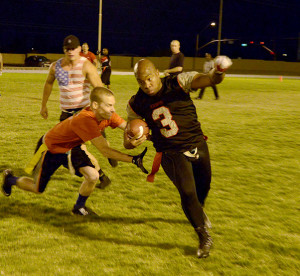 “Our schedule is packed with great teams but that will not stop us from achieving our goal,” said Robert Lawrence, 56th Force Support Squadron cornerback. “We have incredible players on our team and also have great chemistry together.  With those two combined, FSS had a pretty high chance of winning the whole season.”

While flag football is a competitive sport and morale boosting, it also keep the players physically fit, which help with the mission here at Luke Air Force Base: training the world’s greatest F-35 and F-16 fighter pilots.

“Some career fields make it difficult to PT on a daily basis,” said Vernon Sparks, 56th Force Support Squadron wide receiver. “With flag football, it gives players the exercise they need that they couldn’t get during the day.”

For more information on the flag football season, visit www.allprosoftware.et/LukeFall2016FlagFootball for score, team schedules and standings.