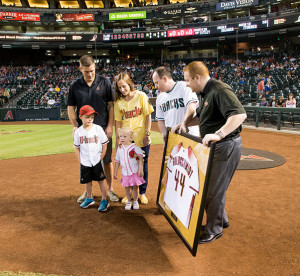 Mason Weedman, son of Carrie and Maj. Aaron Weedman, 69th Fighter Squadron instructor pilot, and cancer survivor and his family are honored at a Arizona Diamondback game Sep. 18, 2016, and presented a framed jersey from the organization courtesy of Sprint at Chase Field, Phoenix, Ariz.

LUKE AIR FORCE BASE, Ariz.–Through love, hope, and the help of Phoenix Children’s Hospital a Citizen Airman and his family celebrated defeating cancer with a trip to the ballpark.

The Weedman’s are huge sports fans with a special connection to baseball and the Arizona Diamondbacks. In an effort to highlight his success story and honor his recovery the Arizona Diamondbacks paid tribute to Mason and other children battling cancer during September childhood cancer awareness month at Chase Field in Phoenix, Arizona.

“The whole family was on the field during the game including doctors from the hospital and an autographed framed jersey was presented to my son,” said Weedman.

A video featuring Mason and his family along with the men and women at PCH who helped the family in their struggle against leukemia was unveiled at the game. The Weedman family instantly connected with the hospital upon moving in the Phoenix area which provided invaluable care for Mason.

Two years earlier at age four, Mason was invited onto Chase field as part of an honorary player starting line-up in a campaign to raise money for PCH. PCH was established in 1983, and has grown to become one of the largest children’s hospitals in the country. It has a medical staff of nearly 1,000 pediatric specialists.

The family stood firmly behind the belief that cancer would not defeat them.

“This is not going to define Mason or our family, this is just a little piece of history and it will be something that will carry him through the rest of his life,” said Carrie. “Cancer will not stop him to grow and reach his dreams.”

Mason continues to be an active six-year old boy involved in the sports that he loves.

“I am appreciative to all the guys in the 69 FS and in the Air Force Reserve for their hard work to help our family. Picking up the slack like taking an extra flight or working extra hours because I couldn’t be at work. It made a huge difference whether they realize it or not,” Weedman said while expressing his gratitude toward his fellow Airmen for their sacrifices during his family’s time in need.

According to Weedman, the strength and courage he and his family had during their battle with cancer came from the support they received and has made the family even stronger. They are ready to see what the next chapter of their lives has in store for them.