Retired Maj. Earl Conrad Jr., a World War II fighter pilot who flew the original P-38 Lightning, visited Luke Air Force Base, Ariz., Oct. 3, 2016, to get a glimpse of the F-35 Lightning II, the namesake of the legendary fighter aircraft which dominated the skies over the Pacific during his time in service.

Conrad’s visit was hosted by the pilots of the 62nd Fighter Squadron, who not only took him on a walk around the flightline to get a closer look at the jet, but also provided the 97-year-old veteran a brief on the mission capabilities of the Lightning II and the experience, equipment, and training of today’s Lightning pilots, all in tribute to the legendary service he and others like him gave to fight both Hitler’s Germany and Imperial Japan.

Conrad’s service commitment, like those of many of the young men and women who joined the armed forces at the time, was spurred into motion by the attack on Pearl Harbor in December of 1941. Conrad, who had been in the midst of studying engineering at San Jose State University, put school on hiatus to sign up for the Army Air Corps that same month.

“Much better than being a gravel cruncher,” Conrad said.

At the time, Conrad had a private pilot’s license that he had paid $25 for in his earlier college days.

“I was kind of interested and my friends were all doing it so I did it,” Conrad said. “They threw a little Piper J-3 Cub at me and let me fly it around for a bit and then I had my license.”

In June of 1942, Conrad graduated from his initial Army Air Corps pilot training. He was then selected and sent to Tallahassee to train to become a P-39 Airacobra pilot, but the demands of the war threw a slight curve into those plans.

“They needed pilots over in the Pacific, so they cut the training short,” said Conrad. “We took a train over to San Francisco and then a boat over to Hawaii and checked out of there in old, beat up P-40s for about two or three weeks before flying to New Caledonia and getting back into P-39s.” 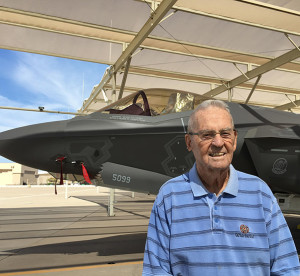 Retired Maj. Earl Conrad Jr., a World War II fighter pilot who flew the original P-38 Lightning, visited Luke Air Force Base Oct. 3, 2016, to get a glimpse of the F-35 Lightning II, the namesake of the legendary fighter aircraft which dominated the skies over the Pacific during his time in service.

After getting a brief substitute training course there to ensure they could participate in combat operations, Conrad and the rest of the new pilots flew their Airacobras to Guadalcanal where, before even landing, they had their first taste of combat.

“As we were coming around the end of the island, there were a whole bunch of ships parked in the water, and they all took a shot at us,” Conrad said.

“They couldn’t tell one plane from the other,” Conrad said. “Fortunately, we all landed safely.”

Conrad tells of another incident in which a Japanese battleship was disabled by U.S. Navy ships right off the coast from the airfield he was stationed at. While for the most part operational, the ship could not move, and those on-board must’ve known just as well as those ashore that it was doomed.

“We were going to sink it right there,” Conrad said. “That night, [the battleship] shelled all up and down the runway and knocked out almost all of our planes, both the Navy’s F-4Fs and our P-39s.”

When a few of the least-damaged aircraft were quickly repaired into functioning condition the next day, one of Conrad’s friends and a fellow pilot mustered up a small four-ship to fly a protection detail.

“They went out to fly and he mistook that same battleship as one of ours, and they ran protection cover for it all day,” Conrad said with a laugh. “You can tell how easily things got snafued.”

The ground situation was no prettier, even in the confines of “friendly” territory.

“There was a Japanese guy we called ‘Wash-machine Charlie’ who had a cannon,” said Conrad. “He would go up in the hills at night about three or four times a week and he would shoot down at us so you’d have to dive into the trenches to get away from him. He was awfully upsetting.”

“It was just like you were driving along in a Cadillac,” Conrad said of the P-38. “It just purrs out there with 1300 horses in each engine.”

The P-38 boasted an incredible amount of speed and power from a unique twin-engine configuration that allowed for excellent performance, especially at high altitudes. Its design was so effective that it saw continuous service throughout the war.

Conrad describes one particular mission in which he flew the P-38 on an aerial patrol. His flight encountered the pinnacle Japanese dogfighter, the Mitsubishi “Zero,” in one of the only pure “mano a mano” aerial engagements he says he faced in his time in the Pacific.

“All of a sudden my element leader yells, ‘There are 30 or 40 Zeroes up here right above us, about a thousand feet!’” said Conrad. “They’d come down and fire at us and then go right back up. I don’t know why they didn’t stay on us, they could have taken us, but I said, ‘To hell with this,” and I went way out and circled back around and came back right up behind four Zeroes.”

Conrad’s flight leader couldn’t make it to the same position without considerable risk, so Conrad told him to dive low and hit the deck while he and his wingman lined up a Japanese target.

“He was toast,” Conrad said. “We had eight 50-caliber guns on him and he just became spaghetti.”

Throughout his service, Conrad received numerous awards and decorations including two Air Medals and the Distinguished Flying Cross. He was Honorably Discharged in 1946.

“Oh, there were a thousand guys who did just what I did!” argued a grinning Conrad.

“Not everyone could do what you did,” Jerry argued back, eyes rolled. “He’s got a lot of medals to prove it.”

“It was an honor to meet with such a great Airman from the past,” said Hertzel. “Even with the incredible accomplishments and the stories of fighting that are hard to imagine in today’s world, men like Maj. Conrad carried themselves with humility and dignity. I am very grateful for the opportunity to have shared with him his legacy in what we do here at Luke and in the F-35.”

As for the legacy of the Lightning, Conrad left Luke’s flightline impressed.

“They picked the right name,” Conrad said of the F-35. “My goodness, I sure wish I could’ve flown it.”