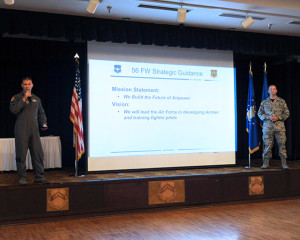 Brig. Gen. Brook Leonard, 56th Fighter Wing commander, reveals the 56th FW’s new mission, vision and beliefs during a Thunderbolt Huddle Nov. 4, 2016, at Club Five Six. The change represents a clear calling toward excellence on a larger scale with a look toward the effect Luke will have on the future of the Air Force.

“I want to say thanks for your tremendous efforts in leading this great wing and most importantly for caring for the sons and daughters of our great nation,” said Brig. Gen. Brook Leonard, 56th FW commander. “Through all of that and many discussions in the last couple of months, we have formulated our way ahead and captured how we will approach the future, namely our mission, vision and beliefs.”

The mission of the 56th FW is — we build the future of airpower, and our vision is — we will lead the Air Force in developing Airmen and training fighter pilots.

A fired up Leonard went on to breakdown each part of the mission and vision in detail, starting with the future of airpower at Luke.

“We are the largest fighter wing in the United States Air Force, and contribute greatly to the future of airpower,” Leonard said. “Not only does airpower reside in our fighter pilot production, it is the intelligence officers we send to operational units, and the maintenance crew chiefs we graduate. It is the partnerships with downtown facilities that train folks across the medical field, the command and control and air battle managers we produce.  What we do now will have a lasting effect on the Air Force.”

“This vision statement first calls out our top priority, to develop our Airmen personally and professionally,” he said. “We are looking at creative and innovative ways of partnering with our community and making everyone in Thunderbolt nation better.”

“Innovatively developing people is a challenge for all of us to figure out how we can do it better and do it more often,” Kwiatkowski said.
Then Leonard talked through our five new beliefs describing who we are, how we do things, what we value and how we operate.

“The mission is why we are here, the vision is what we want to be, and the beliefs are core descriptions of what we value and how we operate,” Leonard said. “Your group commanders and the directors of staff will work with you as we align each unit under this umbrella and focus our daily efforts toward a common purpose.”

Leonard wrapped up the Thunderbolt Huddle by reflecting on our impact on the Air Force.

“I hope you find they represent a clear calling toward excellence on a larger scale and with a look toward the effect today’s actions will have for years to come,” Leonard said.