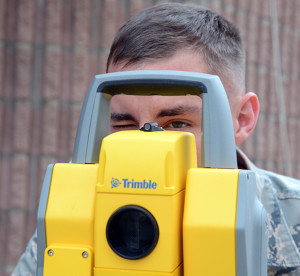 Senior Airman Ryan Holland, 56th Civil Engineer Squadron engineering technician, looks through the view finder of the Trimble Total Station 5600 during a Geographic Information Systems demonstration Nov. 16, 2016, at Luke Air Force Base, Ariz. Holland and the 56th CES engineering flight is in charge of developing maps and sketching plans for events such as an airshow or wing level events.

People around the world use maps to find locations, but at Luke Air Force Base, Ariz., engineers use them for a variety of different reasons. The Airmen at the 56th Civil Engineer Squadron engineer flight make maps by using GIS.

“We use a mapping software called Geographic Information Systems,” said Senior Airman Philip Qin, 56th CES engineering technician. “This software helps us make the maps of the base.”

GIS lets the engineer flight capture all forms of geographically referenced information and transform it into the form of maps, reports, and charts.
According to Qin, the maps produced using GIS are used to accomplish many different missions on base.

“Everyone uses maps for various reasons,” he said. “The Explosive Ordinance Disposal flight use the maps to calculate explosive arc, and airfield management uses maps to generate parking plans for aircraft.”

Buildings are renovated and relocated here at Luke, and it’s the engineer’s job to update maps with any changes.

“Once the contractor turns a building over to us, we start to collect data,” Qin said. “We start with the outside then work our way inside to each individual room to finish scanning a building.”

Not only do engineers use GIS to map buildings, they also use it to gather information on emergency crash sites.

“When it comes to an emergency crash site, we’re usually the first responders to survey the site,” said Senior Airman Ryan Holland, 56th CES engineering technician. “GIS is used to determine the flight path and what type of terrain the plane crashed on.”

Engineers also use it to sketch layouts for big events around Luke.

“Our biggest layout sketch would have to be for the Airshow,” Holland said. “It take us about three months’ worth of planning to gather all the intelligence to make a final airshow map.”

A lot of work goes into making maps, however no one really knowing who makes them according to Holland.

“We’re really invisible to the Luke community,” he said. “People see us out and about with our equipment but don’t know why we exist. With Luke being the future of Airpower, there will be constant changes around the base, and we will be the first ones to document that change.”