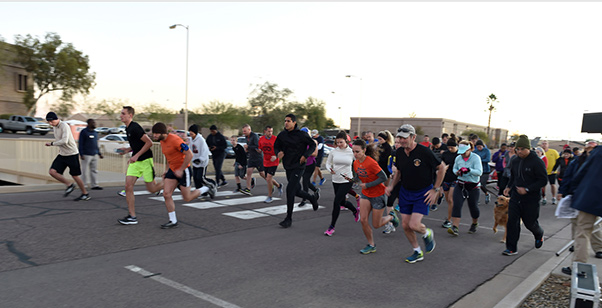 Luke Thunderbolts take off at the start of the Turkey Trot 5K fun run Nov. 23, 2016, at Luke Air Force Base, Ariz. The fun run is geared toward promoting fitness among active duty as well as anyone with base access who would like to participate.

Tis the season for giving and saying thanks. Here at Luke Air Force Base, Ariz., Airmen are getting in the spirit by participating in events like the Turkey Trot fun run and looking forward to the Thanksgiving Day Brunch at the club.

The holidays can be a difficult time for service members since not everyone can go home. To make things easier on those staying in the area, Club Five Six is offering a Thanksgiving Brunch from 11 a.m. to 2 p.m. on Nov. 24, 2016.

“We’re having a combined effort with the Dining Facility to put on a Thanksgiving lunch for Airmen living in the dorms on meal cards or anyone who makes a reservation,” said Eric Caley, 56th Force Support Squadron Club Five Six assistant manager. “Airmen on meal cards do not have to make reservations and can eat for free. It’s a home cooked meal away from home.”

For those not on meal cards reservations are needed. It’s also $27 for non-club members and $25 for club members. Airmen in the dorms should note the DFAC will be open for breakfast and dinner but closed for lunch, Caley explained. 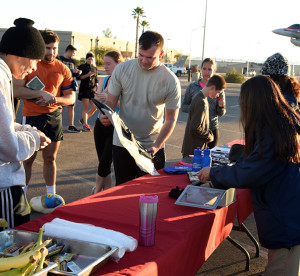 Luke Bryant Fitness Center staff members raffle off prizes after the Turkey Trot 5K fun run Nov. 23, 2016, at Luke Air Force Base, Ariz. The runners who placed in the top three for male and female received a free turkey for Thanksgiving while the remaining turkeys were raffled off as additional prizes.

“The 5K is typically geared toward active duty but is open to everyone on base including retirees, veterans and guests,” said Sandy Benjamin, 56th FSS fitness center operations manager. “We will be giving out free turkeys to the first, second and third-place winners, male and female. We will also raffle off donated turkeys from the commissary along with other prizes as well.”

The 56th Security Forces Squadron will be closing several installation entry points during the upcoming holiday season. Below is the schedule for Thanksgiving.