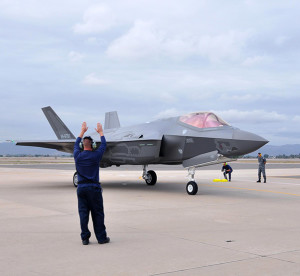 Lockheed Martin and Japanese Air Self-Defense Force personnel work together to taxi in the arrival of the first foreign military sales F-35A onto the 944th Fighter Wing ramp Nov. 28, 2016, at Luke Air Force Base, Ariz. The arrival marked the next step for the international F-35 training program.

The F-35 program hit another milestone Nov. 28 with the arrival of the first foreign military sales F-35 at Luke Air Force Base, Ariz.

The arrival marked the next step for the international F-35 training program as Japan took ownership of the first FMS aircraft to arrive at Luke Air Force Base.

“Today is a great day for the U.S. Air Force Reserve Command, Luke AFB, the 944th Fighter Wing, and the Japanese Air Self-Defense (Force),” said Col. Kurt J. Gallegos, the 944th FW commander. “We have a great team of Airmen who have worked hard to set up an outstanding training program and are ready to train our FMS counterparts.”

The aircraft was welcomed by a joint delegation from the 944th and 56th Fighter Wings, Lockheed Martin, and Japanese staff.

“Today I am thrilled for the Japan Air Self-Defense Force and (Luke AFB),” said Lt. Col. Sean Holahan, the commander of Detachment 2, 944th Operations Group. “The arrival of Japan’s first F-35A marks another important milestone in the steadfast relationship between our two nations, and the beginning of training for an elite cadre of JASDF fighter pilots and maintainers. We put an incredible amount of thought and effort into building the world’s first F-35 foreign military sales training program from the ground up. To see Japan’s first jet on our flightline, surrounded by the men and women who have made this mission possible, is humbling.”

The arrival of the first FMS aircraft is the culmination of years of planning and hard work. 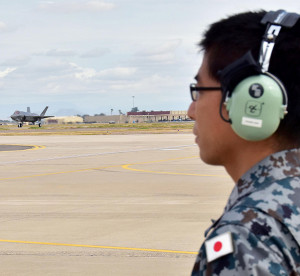 A Japan Air Self-Defense Force maintainer prepares for the arrival of the first Japanese F-35A Nov. 28, 2016, at Luke Air Force Base, Ariz.

“The jet arrival marks the beginning of a new and exciting mission at Luke AFB to train our allies to fly the F-35A,” explained Lt. Col. Joe Bemis, the executive officer and resource advisor for Det. 2, 944th OG. “We have been preparing for this program for years. We have remodeled buildings, built a huge team of professional pilots, maintainers, and administration staff, and created specialized syllabus. We are hopeful that this mission will strengthen relationships between the United States and nations that participate in the training.”

Over the next several years, Luke AFB will be training FMS pilots from Japan, Israel and South Korea along with partner nations including Australia, Italy, Norway, Turkey, Netherlands, Denmark and Canada.

“This is such an important time in our wing’s history as we pick up the mission to train all FMS F-35 pilots,” Gallegos said. “It’s been almost 10 years since our wing has seen aircraft on our flightline. It is an amazing feeling to look outside and see the F-35s out there and know that we are playing such an important and critical role as we build relationships that will enhance our future partnership.”

In addition to the Luke AFB is scheduled to have six fighter squadrons and 144 F-35s.