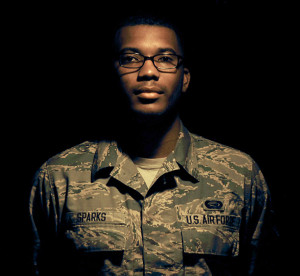 Senior Airman Veron Sparks, 56th Force Support Squadron retirement and separations technician, poses for a photo Dec. 6, 2016 at Luke Air Force Base, Ariz. Sparks used SABC to help a woman who was a victim of a hit-and-run.

On Nov. 30th, an Airman had a choice between being a bystander and letting someone else take care of a situation or responding immediately. He chose to respond, and his actions possibly helped save a life.

“As I was pulling into the parking lot, I saw a purse with all items out of it and I thought, ‘This doesn’t seem right’,” said Senior Airman Vernon Sparks, 56th Force Support Squadron [Luke Air Force Base, Ariz.] retirement and separations technician. “When I went to investigate, I saw a woman laying across the ground.”

His Self-Aid Buddy Care training immediately crossed Sparks’ mind as he ran over to assist the woman.

“I asked her if she was okay, but received no response,” Sparks said. “I checked her vitals and found a steady pulse. As I was performing SABC, she regained consciousness and immediately started to panic. I informed her I was a military member and was just making sure she was okay.”

The woman told Sparks she believed she was a victim of a hit-and-run, but had she had little memory of what happened.

“I had her wiggle her hands, feet and legs to make sure she had a full range of motion,” Sparks said. “Then I assisted her off the ground and onto the sidewalk. I dialed 911 and stayed with her to keep her calm until the ambulance arrived. She told me she didn’t need medical attention, but I called anyway because you never know what could be wrong.”

Sparks knew what needed to be done and took initiative to help the woman.

“I was scared,” he said. “At first I thought she wasn’t alive, but I’m thankful she was.  The exercises from my last base at Osan Air Base in South Korea helped me tremendously, because SABC was one of the main topics we trained on. When taking the SABC online training make sure to pay attention, you never know when you’ll have to put the training to use.”

Sparks did what he was trained to do, and his decision to help is one example of being a good wingman.