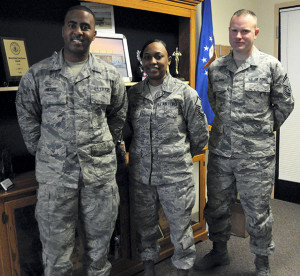 Tech. Sgt. Marquise Heard, 944th FW Reserve recruiter, won the prestigious Century Club, of which only five percent of recruiters ever receive and earned the Rookie of the Year award.

Master Sgt. Ricketa Conley, 944th FW Reserve in-service recruiter, who is responsible for covering the Central Valley, was recognized as a superior performer by gaining 44 new recruits, 125 percent of her annual goal.

The key to the recruiter’s success has been passion and persistence.

“It could be the grocery store or school, but really we talk to people anywhere,” said Conley. “We have to be a people person and there are people everywhere. Sometimes, I don’t even realize I’m recruiting because it feels so natural to talk about the Reserves.”

As a shop, the flight’s six recruiters won Top Large Flight in the third and fourth quarters. They are part of the overall trend that the Air Force Reserve Command Recruiting Service has shown by meeting the accession goal for the 16th consecutive year.

“I’ve never worked with such great professionals,” said Senior Master Sgt. Clayton Callahan, 944th FW recruiting flight chief. “They are a great group of recruiters and we work very hard to ensure we are getting the right people in the right positions for the wing.”

One of the programs that has helped Reserve recruiters reach their goals is the command program called “Get 1 Now”. The program rewards individual Reservists who inspire qualified friends and acquaintances to consider and join AFRC. The program offers reward incentives when potential candidates are verified as a qualified lead. Once the referred individual actually joins as a new Reserve member, the referring service member becomes eligible for rewards like a mini-MagLite, cooler, multi-tool, quad copter, and more. For more information please visit http://www.get1now.us/