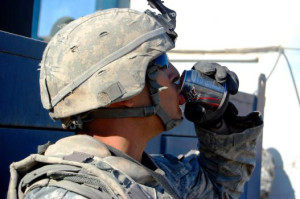 We’ve all seen them before: the cans, small shots and uniquely packaged drinks that promise to give you an energy boost during the most important parts of your day. At first glance, it seems like a great idea: chug it down and get reinvigorated. But, if you go beyond wanting simply to stay alert and you begin to overindulge, you could wind up doing some serious harm to your body.

Energy drinks became the beverage of choice for many service members during the wars in Afghanistan and Iraq. The Walter Reed Army Institute of Research analyzed data collected during Operation Enduring Freedom in 2010 and found that nearly 45 percent of deployed service members consumed at least one energy drink daily. Nearly 14 percent reported drinking three or more per day.

Many of the most popular energy drinks are heavily marketed to young people, including military members. The marketing is sexy; the packaging is slick; the flavors are sweet like the fruit drinks that children crave; and the beverages are readily available on military bases and downrange.
But, there are good reasons to avoid overusing energy drinks.

Side effects
Energy drinks are loaded with caffeine, and too much of it isn’t good for you. Dr. Patricia Deuster, professor and director of the Consortium for Health and Military Performance at the Uniformed Services University of the Health Sciences, warns service members to avoid consuming more than 200 milligrams of caffeine every four hours.

“If it’s got more than 200 milligrams of caffeine, don’t use it,” Deuster cautions.

Deuster also warns female service members to exercise caution, noting that the amount of caffeine you ingest relative to your body weight can be an issue for women. “Women get a higher concentration [of caffeine], since they tend to be smaller,” she said.

“Doctors don’t know what the effects of [energy drink] ingredients are in larger doses,” Deuster noted. “I don’t think anybody has an answer to the long-term effects question.”

What is clear, when it comes to energy drinks, is that consumers need to be more aware of what they’re putting in their bodies. 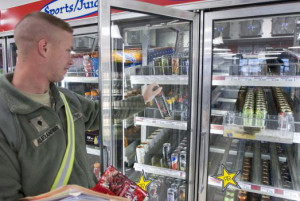 Spec. Kevin Alexander of 138th Quartermaster Company grabs an energy drink at the Camp Atterbury Post Exchange. Most energy drinks contain anywhere from 70 to 200 milligrams of caffeine. The daily recommended intake of caffeine is no more than 300 milligrams.

Sugar bomb
Energy drinks are loaded with sugar. Some cans pack a punch of 27 grams of sugar, two-thirds of the recommended daily maximum for men, and 2 grams more than the maximum doctors recommend for women. Some service members can double or even triple that if they drink more than one energy drink per day.

The Centers for Disease Control and Prevention recommends keeping your intake of added sugars to less than 10 percent of your total daily calories.
Extra sugar can cause your blood sugar to increase, but even the sugar-free versions of energy drinks can lead to weight gain, as research suggests artificial sweeteners may raise blood sugar, too.

“A lot of the young people mix energy drinks with alcoholic beverages, then you’ve got a wide-awake drunk,” Deuster says.

The CDC warns that when alcoholic beverages are mixed with energy drinks, the caffeine stimulant can mask the effects of the alcohol, which is a depressant. Often, the person drinking might not even realize that he or she is actually drunk.

Some companies sell pre-mixed alcoholic energy drinks that have the same sweet or tart flavors as standard energy drinks. As the Army notes, the alcohol content in these beverages can be significantly higher than what’s found in beer.

These energy drinks with alcohol may appeal to underage drinkers because they’re cheaper than hard liquor and they’re marketed with a message that the drinker can last all day or all night long. The sugary nature of the beverages also can lead drinkers to feel like they can imbibe longer than if they were consuming harder alcohol. 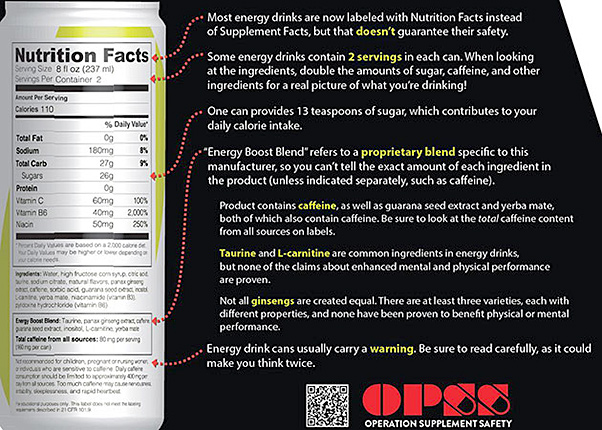 The Human Performance Resource Center cautions energy drink users to be aware of the drink’s ingredients.

A bad night’s sleep
Deuster raises concerns about a problem in the military with energy drinks and sleep. The data back up her concerns. While service members may initially use energy drinks to make up for a lack of sleep, they can easily overuse the drinks, leading lead to a harmful cycle. Excess consumption of energy drinks can cause sleep problems and hamper performance.

Dr. Nancy J. Wesensten, from the Center for Military Psychiatry and Neurosciences Research, tells Army Medicine that research on caffeine shows that it can be effective if used properly.

However, Wesensten notes, “because caffeine impairs sleep, individuals should stop all caffeine consumption at least six hours prior to scheduled sleep. Otherwise, sleep could be impaired without the person even being aware of it.”

Lack of sleep can impact memory and a service member’s ability to pay attention. Research indicates service members who consumed three or more energy drinks each day also had difficulty staying awake during briefings or on guard duty.

The Army’s Performance Triad offers tips on how to get a better night’s sleep, including controlling light and temperature, and recommends that leaders ensure service members have enough time for quality sleep.

Mystery ingredients
Energy drinks are not regulated as dietary supplements. While the cans have nutrition labels, many do not list supplement information.

One area that’s concerning to Deuster is the ingredient taurine. The chemical compound is an amino acid found in animal tissue. Many energy drink makers purport the ingredient will enhance mental and physical performance, but researchers with the Department of Veterans Affairs Medical Center report that little is actually known about taurine’s neuroendocrine effects.

Appealing to service members’ frugality, she adds, “If you want to save money, drink water.”