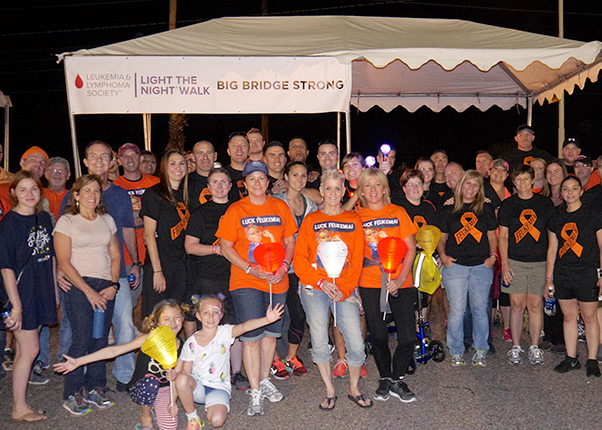 Citizen Airmen understand what the ultimate sacrifice is as a service member, and when a deployment happens, the risk of loved ones receiving bad news is a possibility they accept.

“I received a message from my dad that said please call me ASAP,” said Frankie. “Knowing my pops, I figured something was wrong. What he said next absolutely floored me.”

On June 14 of this year Frankie was informed his mother, Bridget Alcocer, was diagnosed with a rare form of cancer called Chronic Myelogenous Leukemia. Doctors told the family that the success rate for this type of cancer was high and could be beaten.

Soon after diagnosis in early July, Bridget started chemo therapy and after three weeks they had to stop the treatment because it had a damaging effect on her already fragile body.

“The treatment completely destroyed my bone marrow to the point of no recovery,” said Bridget. “I am now on transfusions three to four times a week because my body struggles to make platelets on its own.”

Platelets are tiny blood cells that help the body form clots to stop bleeding and repair damage. These blood and platelet transfusions are the only thing keeping Bridget alive until she receives a bone marrow transplant.

“A transplant will eliminate the cancer, but if my bone marrow should recover without a transplant, I would start chemo all over again,” said Bridget.

In the efforts to locate a viable donor, all five of her siblings were tested and although they were matches for each other, none were a match for her. However, she has recently received good news that there were a few possible donor matches in Germany and Israel.

Some of the issues with bone marrow donors are that when signing up to become a donor, their names can be in a donor bank for up to 20 years. During that time donors may change residences which unfortunately are not updated in the system. 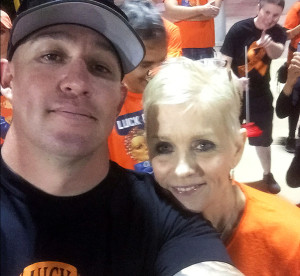 Locating the donor is one obstacle and then finding out if they are still a viable donor candidate, is yet another. Worst case scenario, after locating the donor, they may have already passed away or now have issues of their own they have to deal with.

Although Bridget and her family are understandably concerned about what the future may hold, their spirits and willingness to keep up the fight in their battle against cancer holds strong.

As a family member of the 944th Fighter Wing, the wing is sponsoring a replenishing blood drive during the January unit training assembly to help replenish much needed blood into blood banks.

Bridget and her husband, Francisco Sr., have been supportive throughout their sons’ 18 year military career.

Bridget is an Aetna director of network management and founder of a popular nonprofit organization called Santa for Soldiers, which she started in her own garage in 2007, and has since sent four to five thousand care packages overseas to the troops during the Holiday Season.

Francisco Sr., is currently working two jobs to help out while Bridget fights for her life. He also drives her to all her appointments, most of which are clear across town from where they live in southern Phoenix.

Frankie has started a gofundme site to raise money to help his parents during their time in need. Through the site they have raised $3,400 to date and he encourages people to register to be a bone marrow donor.

Frankie has been with the 944th SFS since April 2007 and has developed lifelong friendships within that time and his parents have adopted his friends into their family. Bridget has even gone as far as hiring Airmen from her son’s squadron to help them out when they needed it.

“I am part of her son’s military family and she treated me as part of her family,” said Tech. Sgt. Angelique Abbott, 944th SFS fire team member. “When I struggled to find decent employment after a deployment to Kyrgyzstan, Bridget offered me a job at Aetna and scolded me for not coming to her sooner. Bridget is a strong woman who has a deep love for her country and those that take an oath to protect it. Her and Francisco have treated me like family and made me feel loved. I would do anything to help when they are in need, as they have both done for me,” she concluded.

“To be on the receiving end of such an outpouring of love, prayers and support has been humbling,” said Bridget. “My love for all of you over the years has just returned twofold. My heart is full, you are the best. There are days I am exhausted, you have filled me with strength … I too am a fighter. I have cancer, but cancer doesn’t have me. Giving up is not an option. Thank you for taking this journey with me and allowing me to be a part of your family. I am forever grateful for my 944th Desert Dawg family, I love you all.”

For more information on where to donate and/or become a donor, contact Master Sgt. Christopher Buscaglio, 944th SFS senior action officer, or visit the link. www.bethematch.org.