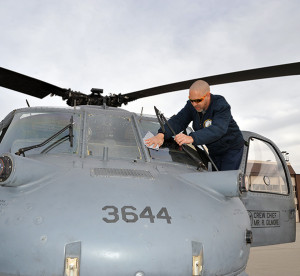 Bob Gilmore, M1 Support Services crew chief, prepares his aircraft for a training mission, where it will surpass 12,000 flying hours.

The 58th Special Operations Wing at Kirtland Air Force Base, N.M., celebrated several notable milestones in 2016, including one of its systems capping the year off by hitting 12,000 flying hours.

Mizner explained that the aircraft originally rolled of the Sikorsky production line in 1984 as a UH-60 Blackhawk. The aircraft then entered service at Eglin AFB, Naval Air Station Pensacola and Hurlburt Field (all in Florida). After undergoing modifications under the PAVE program, the aircraft arrived at Kirtland in 1990.

Since that time, the aircraft has been used to train special operations and combat rescue aircrews. However, 644 has also taken part in real world local rescues in New Mexico and Florida, according to M1’s Dominic Carani, who was an active duty maintainer and crew chief for 644 at Eglin in the 1980s as part of the 655th Consolidated Aircraft Maintenance Squadron.

“We did lots of search and rescues back then, including aeromedevac missions and rescue missions in the Gulf of Mexico,” Carani said.

According to Joe Nevins, the 58th Maintenance Group deputy director, 644 has seen plenty of action since, supporting multiple syllabi for the 58th’s training mission over 26 years.

“Our 60s have the highest utilization rate in the Air Force,” Nevins said.

He said the 644 has averaged 29 flying hours per month over the course of its 34 years. This includes periods out of the rotation for periodic depot and phase.

Lt. Col. Nick Dipoma, 512th Rescue Squadron commander, said the 12,000-hour milestone is a testament to the quality of people maintaining the aircraft.

“The fact that this aircraft has flown for so long is pretty remarkable,” Dipoma said. “This helicopter was training students long before I was in the Air Force; the fact it still flies so reliably, beyond what was initially envisioned, is a huge testament to the quality of our maintainers.” 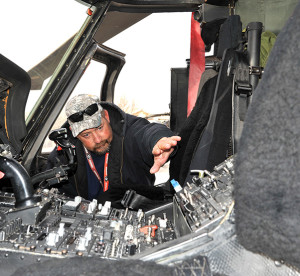 Dominic Carani, M1 Support Services maintainer, discusses modifications made to the cockpit of aircraft 644 over its 34 years in the active Air Force inventory.

The commander added that the aircraft will outlive many of the careers of the people who fly and maintain it.

“Many of the lieutenants and airmen who trained in this helicopter years ago are now colonels, chiefs, or retired. It is certain there are rescue heroes who have saved countless lives in combat over the last 15 years who learned to rescue in this helicopter” Dipoma said.

Current 644 Crew Chief Bob Gilmore, said the team at M1 has a simple philosophy when it comes to maintaining 644 and the other aircraft assigned to the 512th.

“We give it one hundred percent to make sure these things keep flying and keep our aircrews safe—to make sure everybody returns home,” Gilmore said. “I am kind of proud my aircraft’s the first one to make it to 12,000 hours.”

Other notable milestones for the 58th SOW include the unit celebrating the 40th anniversary of arriving in New Mexico from Hill Air Force Base, Utah, in 1976, and the 25th anniversary of assuming the heritage from the 58th Fighter Wing at Luke AFB, Ariz.