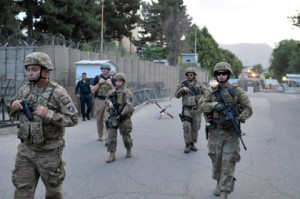 As the sun rises above the mountains in Afghanistan, North Atlantic Treaty Organization military personnel begin to stock their convoys with weapons and ammunition for the sole purpose of delivering equipment to Afghan government forces.

After the troops load their fortified vehicles, they drive out from behind the guarded green zone gates toward dangerous territories to deliver their cargo.

A Luke thunderbolt deployed to Kabul, Afghanistan, March 26 to October 13, 2016, to join these NATO supply missions.

“I worked for the Combined Security Transition Command in Afghanistan,” Taylor said. “We provided assistance to the Afghans while meeting with their government’s upper echelon to determine their needs.”

To successfully supply the Afghans, convoy teams navigated many obstacles.

“No two missions were the same,” Taylor said. “There were always different people with different personalities going on these convoys. We would take different routes and sometimes our Blue Force Tracker navigation device would malfunction leaving us to use a map and compass.”

Navigating Kabul is dangerous, and surrounded by foreign people, Taylor had to constantly watch his surroundings.

“The dangers of Kabul include vehicle, born improvised explosive devices, the Taliban and small arms fire,” Taylor said. “The biggest threat when stuck in traffic is the children who come forward to sell eggs, scarfs and other miscellaneous items. We were briefed on the possibility of the Taliban using children as bombs.”

In the deployed environment, teamwork was crucial to the success of the mission.

“The teamwork was rough at first,” Taylor said. “However after we started hanging out after each duty day, we started building a friendship. You make bonds in that type of environment and it creates something unique that is different than anything else. I met a lot of friends that I’ll never see again, but I would do it again in a heartbeat.”