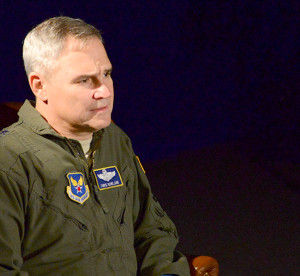 Lt. Gen. Chris Nowland, Air Force deputy chief of staff for operations, plans and requirements (AF/A3), talks about the current pilot shortage across the Air Force at Nellis Air Force Base, Nev., Jan. 10, 2017. In September 2015, the Chief of Staff of the Air Force directed a Fighter Enterprise Redesign to focus on developing a strategy and implementation plan to ensure the Air Force has an enduring, proficient and sufficient fighter pilot force.