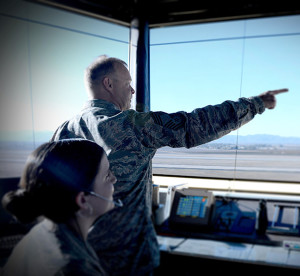 ‘We are known forever by the tracks we leave behind,’ is a statement that strongly resonates with retired Chief Master Sgt. Tadd Cahow, former 56th Operations Group superintendent who retired after nearly 30 years of service.

Cahow joined the Air Force in 1987 and became an air traffic controller.

“I thought I was going to be the one with flashlights directing traffic,” said Cahow. “Then I went to technical school and found out different. Now, 30 years later, I’m retired.”

After getting promoted to staff sergeant, Cahow knew he would be in 20 years, and set a goal to make master sergeant with a master’s degree at 15 years.

“It wasn’t until I made senior master sergeant at 19 years in that I knew I would make chief and serve past 20 years,” Cahow said.

One of Cahow’s proudest moments was the day he made the rank of chief master sergeant.

“My commander at that time realized the significance of that moment and walked out to the flag pole with me to stand at retreat and pay respects to the flag. It was a moment I will never forget.”

Throughout Cahow’s extensive career, air traffic controlling in the Air Force has seen some changes.

“Operationally, how we do things are different, he said. The number of aircraft we talk to is much different because of how we fight our wars. Back when I first started in air traffic control it was not uncommon for us to be speaking with ten to 20 aircraft at a time. Now, they speak to ten to 20 aircraft a day.”

In the future, Cahow predicts the career field will change in other aspects.

“I think the Air Force is going to start utilizing some incredible technology,” Cahow said. “How we operate that technology from our airfields is going to drive how we use our air traffic controllers.”

After many years of managing airfield operations, Cahow now passes the torch to the next generation of air traffic controller Airmen.

“I wish more people would not think about just achieving rank,”Cahow said. “I would rather they achieve success for the Air Force.”

With his recent retirement, Cahow hopes he has left a better future for his Airmen and career field.

“My favorite part of the job is seeing the development and growth from start to finish,” Lamia said. “There’s so much to learn about air traffic here at Luke. I try to be the best Airman I can be, and I take pride in what I do.”