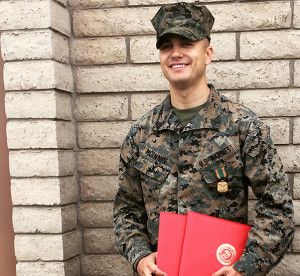 Gabriel R. McInnis, a sergeant in the Marine Corps Reserve, thought he was on a routine drive to serve on a funeral honors detail Dec. 27.

While passing through a residential area in Tempe, Ariz., he heard a woman scream.

As he turned to figure out what the commotion was, he said, he saw a wide-open doorway and a large man physically assaulting Tia Simpkins and her family in her home.

Rapid response
“I knew I had to act,” McInnis said. “I threw my car into park and ran over to try to stop it.”

He tackled the attacker despite being outclassed in height and weight. Soon the pair was on the ground exchanging blows. Although McInnis took a lot of punches, he prevented the attacker from getting to the family.

The attacker threw a punch, missed, and fell to the ground. McInnis used the opportunity to perform an arm-bar takedown, a martial arts move, to subdue his opponent. After restraining the attacker, he dialed 911 and the police responded within minutes.

By putting his own welfare on the line, McInnis was able to prevent the assault against Simpkins and her family.

A ‘true hero’
“I know he is a true hero, because there is no way he could have had time to consider his own safety,” Simpkins said. 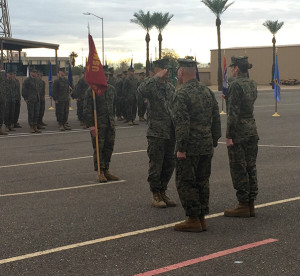 McInnis credits the Marine Corps Martial Arts Program with providing him the training to react.
“I’m an MCMAP instructor, and I spend a lot of my personal time training my Marines,” McInnis said. “The Marine Corps teaches right from wrong, and a bigger guy attacking a smaller woman is definitely wrong. I saw that and knew I needed to put an end to what was happening.”

The Marine leadership in his unit also recognized McInnis’s heroics and awarded him the Navy and Marine Corps Achievement Medal for his actions.

“He is one of the Marines I really look up to,” said Marine Corps Lance Cpl. Logan M. Tucker, an automotive maintenance mechanic with Company C who trained under McInnis for MCMAP. “He is always improving himself and the Marines around him. What he did embodies Marine Corps ethos. If someone needs help, it’s our duty to take care of people.”

Helping others
This is not the first time McInnis has used his Marine Corps training to help others. A few years ago during a flight to Hawaii, McInnis used the knowledge he gained from the Combat Lifesaver Course to help a diabetic woman who had passed out during the flight. “I joined to help people, and I’ve had a few opportunities to do it,” McInnis said.

“He acted with the honor, courage and commitment that we always hear about our Marines having,” Simpkins said. “He risked his own life and welfare in order to protect people that he barely even knew.”