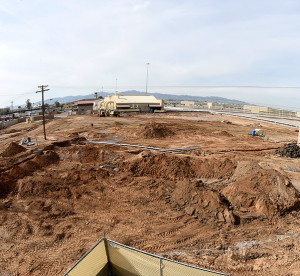 Construction of the fourth F-35 Lightning II fighter squadron began in December of 2016, at Luke Air Force Base, Ariz. This building will include squadron operations, an aircraft maintenance unit and a hangar which can house six F-35s, making this structure the first all-inclusive building for F-35 squadrons at Luke.

With the F-35 Lightning II training moving ahead, new construction has begun at Luke Air Force Base, Ariz., to house more F-35s. Construction for the fourth F-35 fighter squadron broke ground in December of 2016 near the 62nd Fighter Squadron and Nondestructive Inspection Building.

“The construction near the Non-destructive Inspection lab is for the hangar, squadron operations and an aircraft maintenance unit for the F-35,” said Bill Harrick, 56th Civil Engineer Squadron project manager for F-35 projects. “This one is a combination facility where as every other F-35 squadron at Luke has separate facilities for their hangars or AMUs, this will be the only facility on base that will be a full squadron operations, AMU and hangar.”

According to Harrick, the AMU will be on the first floor and squadron operations will be on the second. The building will be approximately 74,000 square feet and the hangar will be able to house six aircraft in its bays.

“The hangar will also include aircraft cooling units as well as pop-up pits for maintenance,” Harrick said.

This construction project will impact the base by streamlining the process for pilots and maintainers to get the job done, Harrick explained.

“The F-35 represents the tip of the sword for the Air Force and the buildings are being constructed to support that,” said Joe Derungs, US Army Corps of Engineers Los Angeles District project manager for military programs. “This will be one of the largest facilities, more sustainable, and have better longevity than previous buildings constructed here at Luke.”

Once completed, the squadron will be up against the flight line making it easier for pilots and maintainers.

“This will enhance the F-35 mission that has come to Luke,” Harrick said. “It’s going to be a 24 aircraft squadron providing all the maintenance and upkeep for the F-35s as well as house all the maintainers and pilots as they get ready to go out and fly.”

The project is estimated to be completed in July of 2018 and marks the crossing of the halfway point in Luke’s F-35 enterprise.