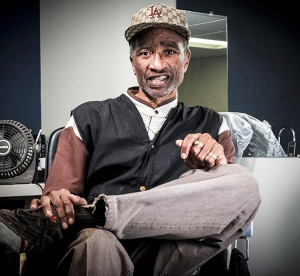 Billy Mayes, Luke Community Center barber, poses for a portrait Feb. 16, 2017, at Luke Air Force Base, Ariz. Mayes grew up during the Civil Rights Era and has seen first-hand why we remind current generations the reasons we celebrate African-American History Month.

Throughout February, Airmen at Luke Air Force Base in Arizona have joined our nation in celebrating African-American History Month.

Contributions and achievements that African-Americans have put forth into the development of the United States have been reflected upon and celebrated. Luke has scheduled events on base to coincide with the national observance.

“This is a time for us to appreciate history and be proactive,” said Staff Sgt. Deirdre Torres, 607th Air Control Squadron NCO in charge of training. “We’ve come so far since African-American History Month first started. Carrying on this tradition is something we do annually.”

The Department of Defense’s theme for African-American History Month this year is “Crisis in Black Education.” Two movies, The Great Debaters and Red Tails, depicting prominent stories endured by African-Americans were screened Feb. 10 and 17. A remembrance march from the 56th Fighter Wing Headquarters to Club Five Six is scheduled Feb. 24th followed by an African-American history ceremony.

“This month is not just for black people, but for others to recognize where we have been and where we need to continue to go in the future,” said Billy Mayes, Luke Community Center barber. “When I begin studying my black history and the stories of what people went through, it brings tears to my eyes.”

During the Civil Rights Era, Mayes grew up in St. Louis, Missouri, and had a front row seat to some of the shocking events that occurred during a contentious time in our nation’s history. Mayes said he has seen first-hand why we remind current generations the reasons we celebrate African-American History Month.

“I remember being a young boy and my mom explaining to me why segregation was a part of our culture,” said Mayes. “I eventually saw it go away, but for a time it could mean life or death.” 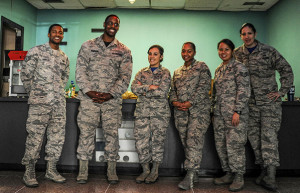 Airmen pose for a photo before the screening of ‘Red Tails’ at Luke Air Force Base, Ariz., Feb. 17, 2017. In celebration of African-American History Month, Airmen had the opportunity to watch movies depicting prominent stories endured by African-Americans.

According to Mayes, education is the best way people can make an impact during African-American History Month. By Luke allowing Airmen time to educate themselves and participate in these events on base, it is a progressive step in the celebration of African-American culture.

“This current generation is crucial in making sure history doesn’t repeat itself,” said Mayes. “They are the ones who need to continue driving change forward.”

According to Torres, all Airmen are encouraged to attend the remembrance march and the African-American History ceremony on Feb. 24 starting at 1:30 p.m. The march will include a timeline of historical events leading up to present day. The ceremony will feature a guest speaker and a performance by the South Mountain Step Team. Refreshments and appetizers will be served.

“We have to put into people’s heads that this is something they need to learn about,” said Mayes. “This is not just black history, it is American history.”