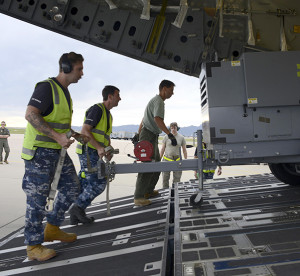 The U.S. Air Force has a strong partnership with allies world-wide. Not only during times of war, but also during humanitarian missions, our countries military forces work together to deliver life-saving supplies to those in need.

For Luke Air Force Base, Ariz., providing support to our partner nations is important in keeping the mission going, even in more nontraditional circumstances.

“Whenever the F-35s go on missions, they need to have their support equipment go with them,” said Tech. Sgt. Aaron Hall, 56th LRS small air terminal operations section chief. “We have the heavy C-17 come in to transport that support equipment.”

For 56th LRS Airmen at the small air terminal operations center, detail is a pertinent aspect when preparing for a mission. Whether it is load planning, passenger processing, or aircraft loading, procedures and regulations must be followed in order for a successful mission.

The small air terminal operations center at Luke has the capabilities to work on a variety of cargo aircraft such as the C-17, C-130, or DC-8. 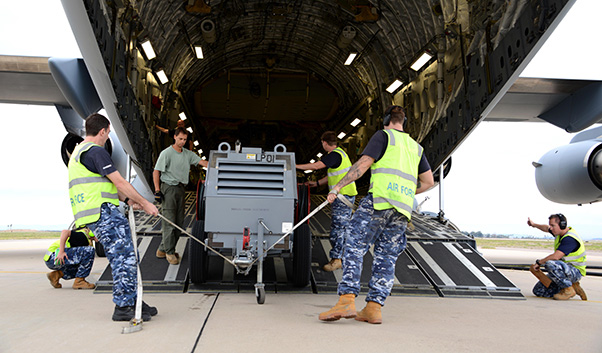 “We typically work only with the U.S. cargo aircraft,” Hall said. “However, being able to be a part of working and loading another countries aircraft for the first time was very exciting for us. This gave Airmen at the air terminal operations section a training opportunity to work with foreign countries in dealing with the transportation of their equipment.”

This milestone provided Luke Airmen not only a learning experience but a chance to see first-hand the amount of effort that goes into planning.

“We’ve had about a month of coordination with RAAF before loading the aircraft,” said Airman 1st Class Emara Lovett, 56th LRS logistics planner. “Being my first load, this gave me a broader perspective on the technical aspects that go into the loading process. It gave me a sense of pride to see the amount of teamwork involved in this mission and it’s great to see all the work put into action.”

With supply equipment loaded into the aircraft, the RAAF C-17 took off for Australia Feb. 23, 2017, in support of their upcoming air show.