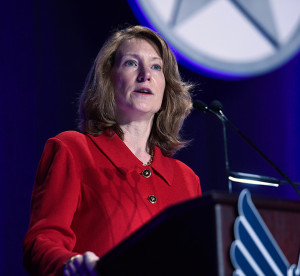 Acting Secretary of the Air Force Lisa S. Disbrow gives her “State of the Air Force” keynote at the Air Force Association Air Warfare Symposium March 3, 2017, in Orlando, Fla. She spoke about the need to invest in Airmen, technology, space and acquisition, and enlist the help of industry to reach this goal.

Acting Secretary of the Air Force Lisa S. Disbrow addressed current and future issues, and talked about some of the occasions the Air Force has to look forward to in 2017 during the Air Force Association Air Warfare Symposium here March 3., 2017.

Disbrow spoke about the importance of a growing active-duty and civilian force, updating aging fleets, and growing leap-ahead technologies.

“Our highest environment priority is improving readiness … our top piece of this among many requirements is to increase end strength,” Disbrow said. “At the same time we must modernize our aging inventory across all major weapons systems with urgency.”

By the end of fiscal year 2017, Disbrow said the active-duty end strength is expected to be at 321,000, however, that number needs to grow to 350,000 in order to fill all the Air Force’s existing units at 100 percent. Amid the current shortage in personnel, Disbrow said careers that are most impacted include maintainers, pilots, acquisition and contract personnel, cyber experts, and software coders.

Civilian and Reserve component manning continues to be less than adequate. Disbrow said since Operation Desert Storm the Air Force civilian workforce has decreased from 262,000 to nearly 182,000.

“Our civilians are critical members of the team, 92 percent of them are in the field, at depots, on the flightline or in hospitals,” she said. “They’re serving proudly in many critical positions.”

Although the Air Force is primarily known for its conventional power, it’s also responsible for a major portion of nuclear deterrence. Disbrow said in order to stay ahead in this realm the Air Force needs to continue to upgrade legacy bomber platforms and needs to recapitalize intercontinental ballistic missiles; however the development of the B-21 Raider is a step in the right direction.

Looking ahead, Disbrow said “we want to increase and improve the use of experimentation and prototyping as pathways to identify new operational concepts and capabilities, but as we do that we must ensure initiatives can be rapidly and affordably fielded.”

Hypersonics is one leap-ahead technology the Air Force continues to focus on, Disbrow said “once weaponized it will be a game changer. Hypersonic technology will enable us to better engage in highly contested environments, [because] speed matters especially when we need to stand off. Hypersonic weapons will allow us to more effectively address short-dwell targets that pop out from cover and then operate and then quickly hide.”

She said the service will also continue to look at how robotics can be used to free up manpower. Robotics technology has already been implemented in 76 pharmacies, being used to fill prescriptions with fewer errors, which in turn will allow the Air Force to repurpose manpower to other important tasks.