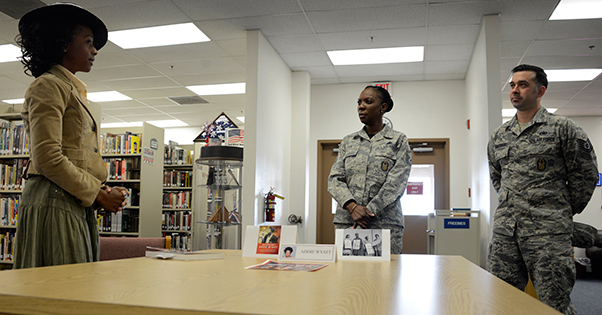 Master Sgt. Melissa Fulton, 56th Dental Squadron dental technician, talks about Addie Wyatt’s contribution to women’s history while portraying her during the Still Museum Mar. 3, 2017, at Luke Air Force Base, Ariz. The theme for this year’s National Women’s History Month honors women who have successfully challenged the role of women in both business and the paid labor force. For more than 30 years, the U.S. government has declared the month of March as Women’s History Month.

This year’s theme for National Women’s History Month honors women who have successfully challenged the role of women in both business and the paid labor force.

“I believe that as a woman, it’s important to educate people with regards to all the changes that have happened for women to be able to hold leadership positions,” said Master Sgt. Loraine Reese, 56th Fighter Wing complaints resolution superintendent and co-coordinator for the still museum.

“We voted on who we felt like we can portray and honor locally,” said Master Sgt. Melissa Fulton, 56th Dental Squadron dental technician and event coordinator for the museum. “You don’t have to be a big name in society to do big things for the society.”

When the guests went to each station, they pressed a button and the volunteers came to life and portrayed the women they were representing.

“Ever since I was introduced to Women’s History Month I’ve been passionate about it,” Fulton said. “I volunteered because I believe strongly in minorities having a voice. You don’t have to be a minority because of a certain color. You can be a minority just because you think differently than most people. It’s the diversity that makes the country so rich.”