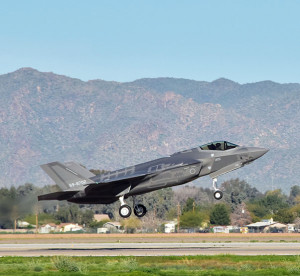 Student and instructor pilots working under the Foreign Military Sales program reached a historic milestone March 7, 2017, when they flew their 100th sortie at Luke Air Force Base, Ariz.

The milestone is significant for the team making the mission happen on a daily basis.

“It was truly a reflection of the teamwork between operations and maintainers, and also the collaboration between the 944th Operations Group Detachment 2, Japan Air Self-Defense Force, and Lockheed Martin,” said Maj. Michael Hobson, 944th OG Det. 2 assistant director of operations, who flew the history-making sortie with one of four Japanese F-35A jets.

Luke acquired the Japanese jets for the FMS program, thus enabling JASDF pilots to train here. The first of three classes started in December and is already on the fast track to reaching all training goals ahead of schedule and graduating its first two students in May. The students include a JASDF commander and director of operations.

“They’ve got thousands of flying hours and they’re extremely experienced pilots with the F-2 and F-4, so they have flown 4th generation fighters before,” said Lt. Col. Eric Puels, 944th OG Det. 2 director of operations. “So this is really a transition course which is similar to what we do on the U.S. side but tailored to their needs and what they do in their country as far as training and execution.”

The course is a mix of classroom academics, simulators and flights. Upon completion of the course, the students will have the tools they need to create their own F-35 training program back home.

“(Our students) are going through the transition program now, teaching them how to fly the aircraft and execute operationally as wingmen, then they’ll undergo instructor pilot upgrade added on to what they know so they can go home and instruct their teammates and build their own program from scratch,” said Puels.

The 100th sortie is just one of many successes under the team’s belt. Puels credits the success to the synergy and efficiency of the team.
“This is probably just one of a dozen firsts we’ve experienced in the past two months alone,” said Puels. “Operationally, it means a great deal to be able to reach this milestone as quickly as we have. It shows that the innovative scheduling process and relationship that we have with our maintenance folks and with the operations folks is working and we’re excited about that. We’ve taken innovative steps to do things outside of the box.”

The pride in reaching this historic sortie is also shared by Team Luke’s partners from JASDF.

“We have accomplished our 100th sortie with only three months of flight operations here at Luke AFB and I would like to celebrate this milestone with each and everyone here,” said JASDF Maj. Toru Tsuchiya, Japanese F-35A foreign liaison officer. “I’m honored to work with the elite U.S. Air Force pilots and Lockheed Martin employees. I appreciate the outstanding support they have given us during this endeavor.”