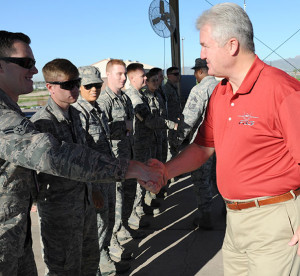 Retired Chief Master Sgt. of the Air Force Gerald Murray greets Airmen upon his arrival to the 56th Equipment Maintenance Squadron March 10, 2017, at Luke Air Force Base, Ariz. Murray visited Luke and interacted with Airmen for the entire day sharing his stories and advice from his 29-year career in the Air Force.

Retired Chief Master Sgt. of the Air Force Gerald R. Murray recently visited the 56th Fighter Wing to engage with thunderbolts and serve as the guest speaker for the 2016 Maintenance Professional of the Year Banquet March 11, 2017.

Murray took time to reflect on memories of the 56th Fighter Wing, how the maintenance career field has changed and what needs to be done to develop future Air Force leaders.

“It is exciting to be back on the base, back around Airmen, engaging with Airmen and sharing stories with them,” Murray said. “Hopefully, they will glean something from my 29 years in the Air Force. My first wing in the Air Force was the 56th Tactical Fighter Wing, so I share some history with the men and women here.”

Murray served as an aircraft crew chief during his time in the Air Force, working on the F-4 Phantom, F-16 Fighting Falcon, the A-10 Thunderbolt II and had eight maintenance assignments during his career, which made him a good fit for this year’s MPOY.

“It’s always a pleasure to come out and speak at MPOY banquets because they’re a lot of fun,” Murray said. “Maintainers have a lot of energy.”

Aircraft maintenance has steadily evolved since the late 70s when Murray joined the Air Force. Technology has expanded the capabilities of the Air Force, however, the basics elements of the system still remain the same.

“It is still the electrics, the hydraulics and the propulsions that drive the machines, but the electronics and the software in use is changing today,” Murray said. “The advancements of the F-35 Lightning II and ALIS, the Autonomic Logistics Information System, is far beyond anything I ever had a chance to work with.”

As Air Force technology progresses, so do the men and women of the Air Force. The development of Airmen is an important part of career advancement and Murray said he is pleased to see that it continues to be a priority. 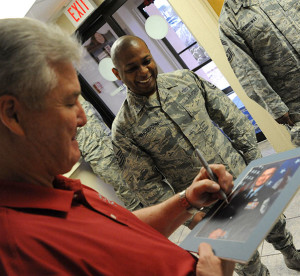 “I think we have focused now for the better part of 20 years on developing our core, and I’m pleased to see how far we have come, and yet it continues to be the topic of discussion,” Murray said. “The most important thing is that we never lose sight of our ability to continue to develop our Airmen for the environment they are in today.”

Providing direction for the enlisted corps was Murray’s priority as chief master sergeant of the Air Force. His job was to ensure Airmen have the right experience, education and training to succeed in their career.

Murray didn’t plan on being the top enlisted leader in the Air Force, but credits hard work and leadership development to his success.

“Every blind squirrel finds a nut sometimes,” Murray said. “I never set a goal to be the chief master sergeant of the Air Force. Doing my job to the best of my ability, and trying to be developed as the best leader as I could be started out in the fundamentals. I pinch myself every day to have had such an honor.”