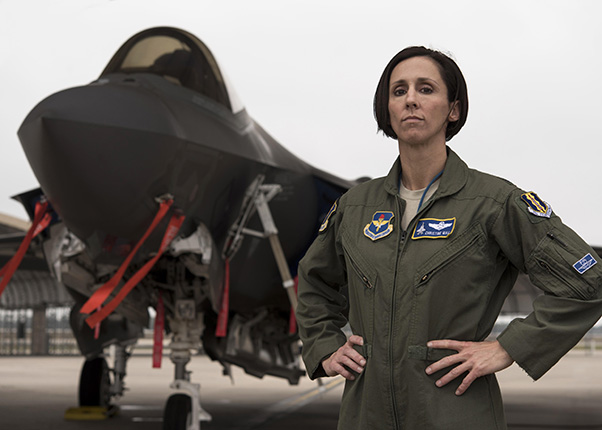 Lt. Col. Christine Mau, 33rd Operations Group deputy commander, stands in front of an F-35A Lightning II Feb. 27, 2017, at Eglin Air Force Base, Florida. In 2013, Mau became the first and only female F-35 pilot in the world after flying the F-15E Strike Eagle for 16 years. She uses her unique position to embolden and motivate young men and women into the field of aviation.

At what point in time did you realize your calling in life? Can you pinpoint a specific moment when you decided the goal you would dedicate yourself to?

“I can very clearly remember these fighters beating up the pattern and saying ‘I want to do that same thing one day,’” Mau reflected, with her eyes lighting up. “I can remember my mom saying women couldn’t do that yet; it stuck with me.”

Although flying fighter aircraft wasn’t opened to women until 1993, Mau set her sights on being a fighter pilot while she was still in high school.

“Some people looked at me like I was crazy, but my friends looked at me like, ‘yup, she is going to fly fighters,’” Mau recalled. “That’s just the person I was: confident, determined and super stubborn.”

Mau was accepted to attend Air Force Academy in pursuit of her fighter pilot dreams in 1993. Her flying career took off from there. She excelled through Undergraduate Pilot Training where she achieved her dream of being a fighter pilot. From there she went on to Introduction to Fighter Fundamentals and then the F-15E Basic Course.

She was competitive and eventually learned to be “thick-skinned”, both qualities she needed during her journey. She also realized quickly how few women there were in aviation positions. 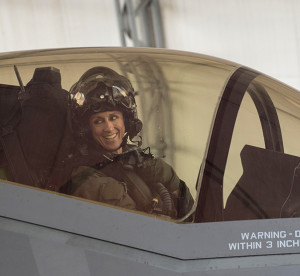 Lt. Col. Christine Mau, 33rd Operations Group deputy commander, looks back to one of her crew chiefs from an F-35A Lightning II Feb. 27, 2017, at Eglin Air Force Base, Florida.

As she climbed through the ranks, she progressed through the chain of command and became a squadron commander at Seymour Johnson Air Force Base, N.C., her final Strike Eagle assignment. After 16 years in the Strike Eagle, Mau transitioned to the F-35A in 2015; the first and only woman to do so.

“I’ve faced challenges my entire career, but nothing that was insurmountable. What didn’t kill me made me stronger and it’s what made me who I am today,” Mau said.

Mau recognizes the significant role she plays as the only female F-35 pilot and strives to embolden and motivate young men and women into the field of aviation.

While the Air Force is comprised of 19 percent women, under 6 percent of pilots are female. Furthermore, only around 2 percent of fighter pilots in the Air Force are women, a career field that is already facing severe manning shortages.

“It’s a role that I need to honor,” Mau said. “I want to inspire young people, men and women alike, to love aviation. I do what I can to influence them in a positive way and encourage them to pursue these careers.”

Although she recognizes there is a shortage of women in the industry, she is clear that it is not her intention to simply raise the number of women aviators in the Air Force. Her goals, like those of many of the Air Force’s great leaders, are to encourage diversity and inclusiveness. 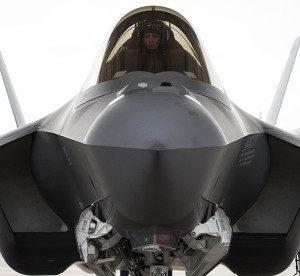 Mau’s most inspired discussions, whether it be with boys and girls starting their lives or the men and women she leads, are of the career she has loved in the Air Force. She reached the status of command pilot and accumulated more than 2,500 flying hours across more than five aircraft platforms, 10 assignments and five deployments. Mau looks back on these achievements and many others she accomplished during her 20 years of service as she looks towards the next transition in her life: military retirement.

“Retiring makes me a little emotional. Flying fighters is all I ever wanted to do,” Mau said, glumly at first but then flashing a smile. “Every day I kind of pinch myself when I realize this is my job. I was flying home the other day and looked over my shoulder and said to myself ‘yeah, this is awesome.’”

Her dedication to her craft in the air and on the ground led to her earning the 2016 National Aeronautic Association Stinson Trophy for enduring and outstanding contribution to the role of women in the field of aviation.

Mau says she holds this achievement closest to her heart because it culminates the career she has dedicated to flying and her personal goal of enabling young people to achieve their dreams. As a Stinson Trophy winner, Mau joins some of the most influential women in aviation history, including her mentor and friend Col. Jeannie Leavitt, the first female fighter pilot.

“To be awarded and recognized for something that I am passionate about is pretty fulfilling,” Mau said. “It’s an object that represents my passion which is flying. I love flying, and I am also passionate about persuading young people to find and pursue their passion.”

While reflecting on her career and the significance of her milestone, her pride in her work shone through. She referenced part of a quote from another role model, Vince Lombardi.

“’The greatest fulfillment is to work your heart out in a good cause and lie exhausted on the field of battle- victorious,’ embodies how I feel about my career. I have worked really hard and I’ve given it my all. I’ve gotten through the hard parts, but ultimately I’ve loved serving my country.”