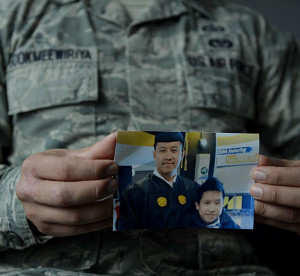 Staff Sgt. Srun Sookmeewiriya, 313th Expeditionary Operations Support Squadron NCO in charge of reports, holds up a picture of him and his younger brother, Thana, on Ramstein Air Base, Germany, Feb. 16, 2017. Sookmeewiriya, who attempted to commit suicide twice, draws inspiration from his brother to remain resilient and encourages Airmen to open up about their struggles.