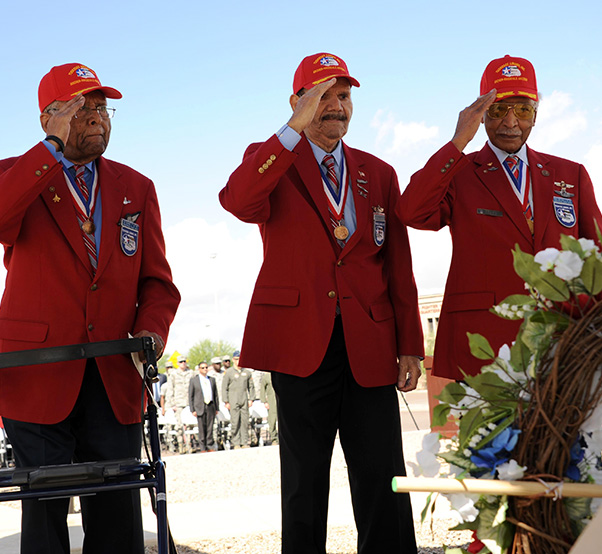 The fourth Thursday in March has become a significant date in Arizona as a day to celebrate the famed Tuskegee Airmen who helped shape the diverse culture of the United States Air Force.

“We highlight this as a celebration because we want to pay it forward,” said Ben Bruce, 56th Fighter Wing occupational safety manager and ARAC historian. “I think what the Tuskegee Airmen story does for the Air Force is highlight diversity and the value it holds.”

The 302nd fighter squadron, which was one of four African-American fighter squadrons to enter combat during World War II, was attached to the 944th Fighter Wing Reserve Component which calls Luke home today. Over 15,000 combat sorties were flown and 250 German airplanes destroyed by the Tuskegee Airmen in WWII advancing the United States toward ultimate victory. 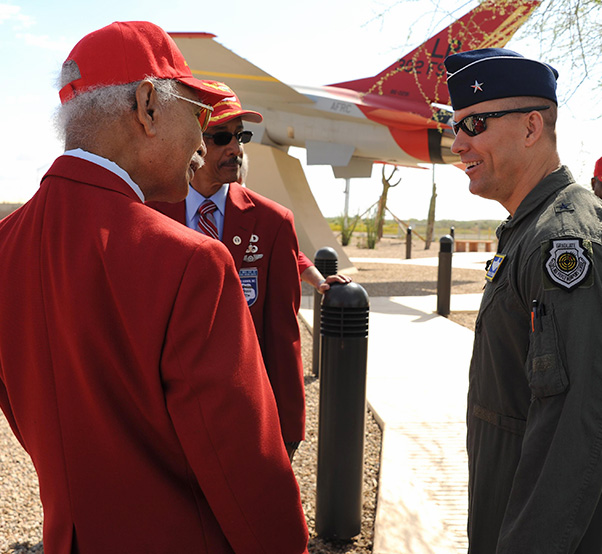 Brig. Gen. Brook Leonard, 56th Fighter Wing Commander, interacts with members of the Archer-Ragsdale Chapter of Tuskegee Airmen March 23, 2017, at Luke Air Force Base, Ariz. Luke’s relationship with the Tuskegee Airmen stems through the 302nd Fighter Squadron which was one of four African-American fighter squadrons to enter combat during World War II. The 302nd FS was attached to the 944th Fighter Wing Reserve Component which calls Luke home today.

“We want people to understand where we came from, where the contributions were made and why it is important for us to remember the events of the Tuskegee Airmen,” Bruce said. “It is historically significant.”

The commemoration ceremony highlighted the Tuskegee Airmen’s commitment to aviation history and the struggles of overcoming racial discrimination. During the ceremony, military honors were performed to recognize the Airmen including speeches from distinguished guests, the laying of a wreath at the base of the static display and the Luke AFB Honor Guard playing of taps. A luncheon was held at Club Five Six immediately following the ceremony.

“The real impact of the Tuskegee Airmen has to be looked at in the context of the great obstacles that had to be overcome,” said retired Col. Richard Toliver, author and second generation Tuskegee Airmen. “Not only did they have to fight to win the war overseas, they had to prove themselves and fight to overcome stiff racial suppression back at home.”

Although many of the original Tuskegee Airmen have passed away, Luke plans to continue hosting the commemoration day to continue sharing the legacy left behind by these American heroes. 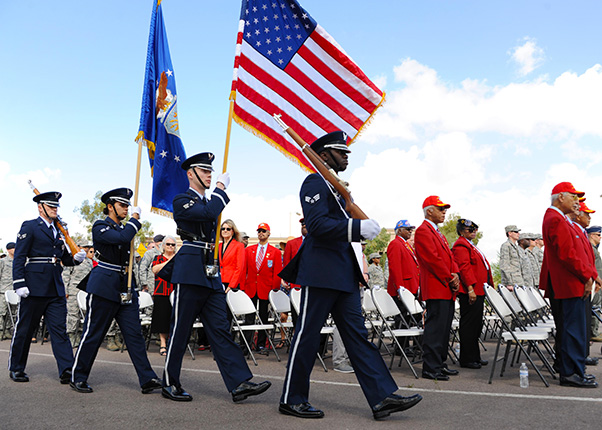 Luke Honor Guard members march into the Fourth Annual Commemoration Day for the Tuskegee Airmen March 23, 2017, at Luke Air Force Base, Ariz. A presentation of colors, playing of taps and the laying of a wreath was all part of the ceremony commemorating the Tuskegee Airmen.