Jumping out of a plane at more than 10,000 feet is not for everyone. For cadets in the Wings of Blue Parachute Team from the United States Air Force Academy, performing this feat is an almost daily occurrence.

“These are absolute prime conditions for jumping,” said Noah Taylor, Cadet Second Class at the USAFA and Scottsdale, Ariz., native. “It’s always fun to come back and share with my team the environment and climate that I grew up in.”

The primary mission of the Wings of Blue is to run the Air Force basic free-fall course, AM490. Throughout the week, Luke supported Wings of Blue by coordinating the use of the range and allowing the use of the Gila Bend facilities. The cadets and their instructors had an active week practicing skills and maneuvers further developing the teams parachuting proficiency as well as their sky diving performances.

“Luke and Gila Bend have done everything for us,” Taylor said. “Living, eating and jumping here with this kind of support gives us more time to focus on getting the job done.” 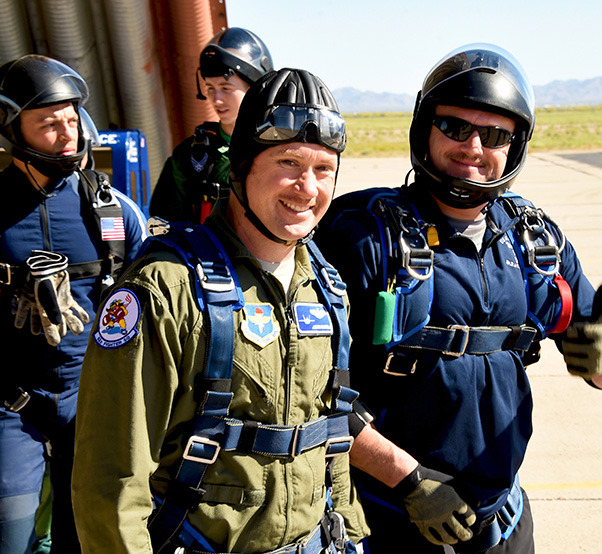 Lt. Col. Jason Bartels, 62nd Fighter Squadron pilot, prepares to skydive for the first time with the Wings of Blue Parachute Team, March 29, 2017 at the Barry M. Goldwater Range in Gila Bend, Ariz. Throughout the week, Luke AFB supported the Wings of Blue mission by coordinating the use of the range and allowing the use of the facilities in Gila Bend.

The Wings of Blue organizes more than 19,000 training jumps annually and more than 2,000 of those will be conducted during the team’s time at Gila Bend.

“Today I had the chance to go for a jump which I have never done before,” said Lt. Col. Jason Bartels, 62nd Fighter Squadron pilot. “One of the things I have seen out here is the professionalism being taught as these cadets prepare to enter the United States Air Force.”

Bartels was able to skydive for the first time with a Wings of Blue tandem master.

“I now get to share another experience that the United States Air Force has given me,” he said.

To see the Wings of Blue perform check their schedule for a show near you at www.wingsofblue.com. 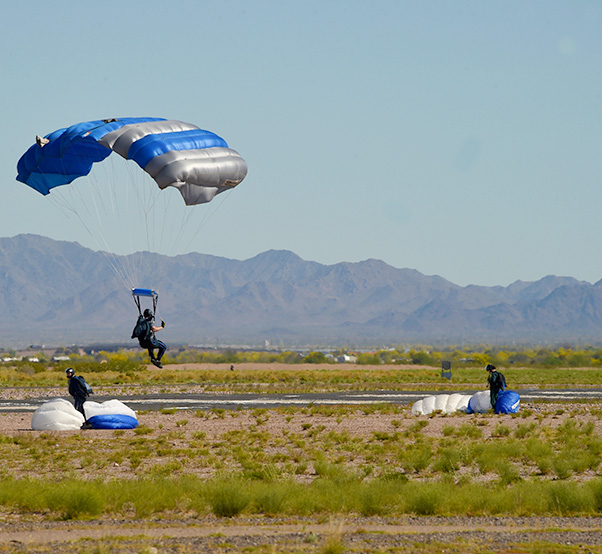 A cadet from the Wings of Blue Parachute Team prepares to land in a designated zone, March 29, 2017 at the Barry M. Goldwater Range in Gila Bend, Ariz. The Wings of Blue performs at Air Force events such as air shows and footballs games as well as select professional sporting events. 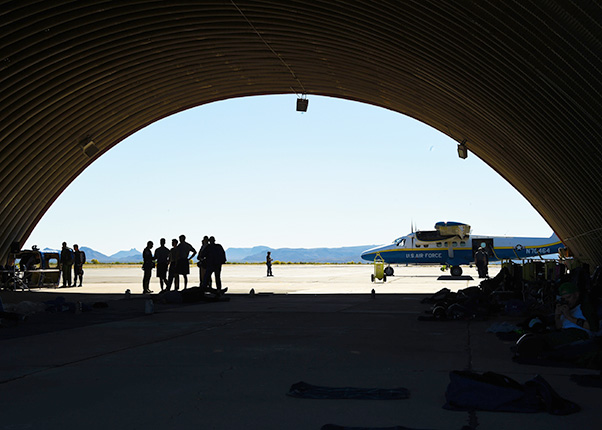 Wings of Blue Parachute Team cadets prepare their gear in a hangar before a jump, March 29, 2017 at the Barry M. Goldwater Range in Gila Bend, Ariz. Arizona hosts an ideal climate for the Wings of Blue to skydive and practice parachute maneuvers during their annual spring training.