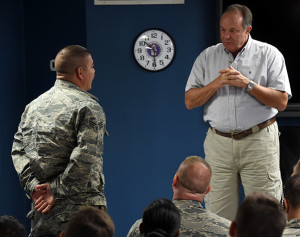 Retired Gen. Philip Breedlove, a former 56th Fighter Wing Commander, answers questions from students at the Airman Leadership School, March 30, 2017, at Luke Air Force Base, Ariz. Almost a year into retirement, Breedlove has plans to keep in touch with Airmen but also to pursue some of the passions he now has more time for.

The year was 1977 when a young man took his first salute as a second lieutenant.

Little did he know more than four decades later, he would hang up his Air Force uniform and retire as a four-star general leaving a lasting impression from his distinguished career.

“Coming back to Luke is very much like coming home,” Breedlove said. “Being able to reconnect with Airmen performing the current mission is very special now looking from the outside.”

According to Breedlove, his time as the commander of Luke had a deep-rooted impact on his career, making him visit several times since he was last stationed here more than 13 years ago.

Breedlove was the NATO supreme allied commander for Europe and the commander of U.S. European Command before his official retirement May 4, 2016. Now, almost a year into retirement, Breedlove has plans to keep in touch with Airmen but also to pursue some of the passions he now has more time for.

“I have taken on several part-time jobs since retiring which takes up a lot of my time but are also important to me and my service as a retired officer,” Breedlove said. “However, I am enjoying some sunshine and the beach as my wife and I move into our forever home.”

According to James “Rusty” Mitchell, Luke Community Initiatives Team director and long-time friend of Breedlove, he plans on continuing his friendship with Breedlove during his retirement. Mitchell himself is a retired lieutenant colonel and served as a squadron commander under Breedlove during his tenure as the 56th FW commander.

“Without a doubt we will stay in touch,” Mitchell said. “We both have a passion for riding motorcycles and have shared several ‘bucket list’ rides together. We are already planning our next trip.” 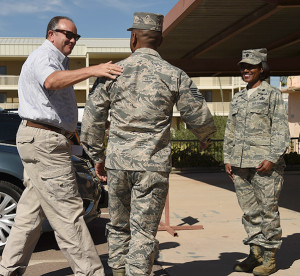 Retired Gen. Philip Breedlove, a former 56th Fighter Wing Commander, greets Airmen upon his arrival to the Airman Leadership School, March 30, 2017, at Luke Air Force Base, Ariz. Breedlove visited Luke and interacted with Airmen during his two-day visit, sharing his stories and advice from his 42-year career in the Air Force.

Breedlove’s establishment of the Community Initiatives Team was one of his greatest accomplishments during his time at Luke, explained Mitchell. The CIT helped build long-term trusted relationships between the base and the community unlike anywhere else. The fruits of this were most notably seen during the selection process for the primary pilot training base for the F-35 Lightning II. Mitchell continues running the CIT program and attributes its success to Breedlove’s realization for the program in the first place.

“Luke carries a special responsibility,” Breedlove said. “As I come back now and meet with the local leaders from the community and the base, it is amazing to see everyone come aboard and join us to carry on the vital mission and support the Airmen at Luke.”

Breedlove visited Luke as part of his trip as the keynote speak at the Fighter Country Partnership annual meeting. During his time in the West Valley he met with FCP leaders hearing about how they are supporting the Airmen and mission of Luke and participated in several FCP events including the first sergeant appreciation dinner and update brief to Luke leadership.