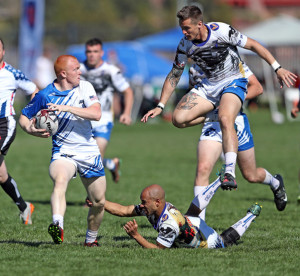 SrA Dylan Vogel, 56th Medical Operations Squadron medical technician, leaps over a fallen teammate to run down an opposing ball-carrier during a scrimmage at the Las Vegas Invitational March 2, 2017. Rugby is one of over a dozen sports included in the Air Force World Class Athlete Program.

Rugby is an often misunderstood game in the United States. It has a well-earned reputation for toughness and high athleticism, but also for foreignness, as evidenced by the stark contrast in the sport’s international popularity with its virtually non-existent presence in major American sports media.

This lack of awareness is equally prevalent in the Air Force where rugby, though being one of the official sports of the U.S. Air Force World Class Athlete Program, remains little-spoken among Airmen. Some in U.S. Air Force rugby consider this a lost opportunity and believe that even a small U.S. Air Force team can and has made an impact on the elite competitive circuit of the international rugby scene.

“We know there are a ton of athletes within the Air Force who aren’t playing any sports, or maybe they’re playing flag football or something like that, and they simply don’t know Air Force rugby exists,” said Maj. Saleem Razvi, 56th Fighter Wing deputy staff judge advocate and U.S. Air Force Rugby player. “We want individuals to see what rugby is all about and give them the opportunity to play at a high level.”

One of these individuals was Airman 1st Class Steven Taylor, 56th Medical Operations Squadron aerospace medical technician and current Air Force Rugby player, who as a multi-sport athlete throughout high school was originally skeptical of the prowess of an Air Force team.

“I didn’t have the highest expectations,” Taylor said. “There are only so many people in the Air Force and rugby isn’t the most popular sport in the United States. I was very surprised to find that the level of ability of the players on the Air Force team was extremely high. They play at an international level. The coaches are international-level coaches. This is a top-notch rugby program.”

As part of the WCAP, the U.S. Air Force provides several rugby training camps every year at major competitive tournaments. Attending Airmen not only learn from renowned professional coaches, but also get the chance to compete against world-class teams in scrimmages designed to highlight and mark the Air Force’s best talent for potential selection to compete at the Armed Forces Invitational. From there, players are scouted for potential selection to the US Olympic team.

“It was amazing,” Vogel said. “We scrimmaged the German and Russian national teams. We played against the Misfits, a team composed of ex-Olympians. It was a lot of good competition and it was a great learning experience.”

The Air Force teams, two male and one female, competed in the elite bracket of the tournament, designed for Olympic-level competition. Full of new faces mixed in with the old, the task for the Air Force teams was daunting, but they managed to bring home victories.

“I think we won two or three,” Vogel said with a laugh.

In addition to competing, the U.S. Air Force players got the chance to learn from some of the top coaches and competitors in the sport during their camp portion. Garrett Bender, who plays for the U.S. National Team and was part of the 2016 Men’s Olympic team, and Theo Bennett, who is an experienced international coach with credits to professional clubs around the world are examples.

“We learned so many little things that you wouldn’t normally think about,” Vogel said. “Passing dynamics, looking down the field, improved tackling, how just closing my hand during a pass would spin the ball better than actually trying to spin it with my wrist. Just little tricks that would give us the edge.”

Another opportunity for the Air Force at the Invitational was the introduction of the first-ever U.S. Air Force Women’s Rugby team composed of 19 female Active Duty, Guard, and Reserve Airmen from stations around the world. 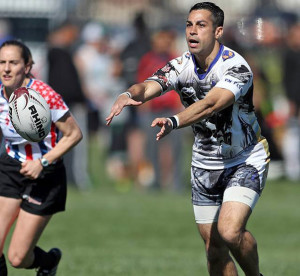 Maj. Saleem Razvi, 56th Fighter Wing deputy staff judge advocate, drop kicks the ball during a scrimmage at the Las Vegas Invitational March 2, 2017. Rugby is one of over a dozen sports included in the Air Force World Class Athlete Program.

“The women’s team did very well in the face of a pretty big challenge,” Taylor said. “The pool for male players in the military is much larger without even considering the fact that rugby is generally more popular with men. We had NCAA Division I players on the men’s team from the Air Force Academy and veterans who have competed at this level for years. Some of the women’s team had never played Rugby before, ever, and they set the bar pretty high.”

Rugby differentiates itself from other sports by demanding only the use of the raw strength, speed, and aggression produced by a player’s body without equipment, padding, or special protection.

Under Rugby Union rules, the ruleset used by Sevens rugby, the core structure of the game functions similarly to Gridiron Football. The team in possession of the ball must move the ball to the opposing side of the field in the hands of a friendly player in order to score. The opposing team attempts to stop forward progression and force a turnover by tackling the ball-carrier. Play, however, does not stop after a tackle.

Once tackled, the possessing player must either immediately pass the ball backwards to a teammate or let the ball go so that both teams may contest possession and continue play. While the ball may be lateraled or passed backward, there are no forward passes. All progression must be gained from running the ball.

“American Football was derived from rugby, but rugby is also similar to soccer because it’s a continuous game,” Razvi said. “Ball movement normally only stops for penalties, or if the ball goes out of play.”

Like any sport, rugby contributes to individual Airman development by providing a focus for maintaining high physical fitness standards, enhancing teamwork and camaraderie, and helping to build a character defined by hard work and competitiveness. Rugby stands out, however, by channeling aggression and respect side-by-side.

“Some people call it the last gentleman’s sport,” Razvi said. “Even though there’s only one ref on the field, everyone respects that ref. And all the players respect each other because of what you give on the field.”

Taylor believes that Airmen and other military service members are uniquely suited to the team dynamic of the sport, which allows them to excel.

“I think rugby appeals to military people very well because of its unique sense of brotherhood and sisterhood,” Taylor said. “You don’t really have that same type of bond in other sports. Rugby looks barbaric, but it’s one of the most respectful sports you could possibly play. You don’t argue with the referee. His name is sir, no matter what. At the end of the game, no matter how brutal it was, you’re hugging the players on the other team and grabbing a drink with them afterwards.”

A common fear for those who have never played rugby is that they will be unable to participate and be competitive because they are too old to learn or have not been exposed to the sport at an early enough age. Taylor is confident that rugby is a sport in which talent is built, rather than innate.

“Trying to get involved in other sports, sometimes you get looked down upon for not having as much experience or not being as athletically gifted as other people,” Taylor said. “In rugby, that’s not the case. You can walk onto one of the best teams in the nation having never played before and you’ll instantly feel that bond which will support you and inspire you to get better.”

Vogel echoes this, having never played a contact sport prior to participating in U.S. Air Force rugby for the first time this year.

“I played basketball and soccer growing up, and did track in college,” Vogel said. “I never played football or anything like that, and I definitely didn’t even know what rugby was seven months ago, much less that the Air Force had a team. Now I’m playing in tournaments with pros. It’s been pretty rewarding.”

Both Airmen look forward to the next U.S. Air Force camp at the Bloodfest Sevens Tournament in Austin, Texas in June, where selections for the Armed Forces team will be made. Following that, the ultimate dream is selection to the U.S. Olympic team.

“My ultimate goal is to get WCAP’d,” Vogel said. “I don’t think it could happen this year, I’m still pretty new, but next year my goal is to make the Armed Forces tournament and get selected.”

To learn more about getting involved with Air Force rugby or other official Air Force sports programs, visit http://www.myairforcelife.com/sports/.