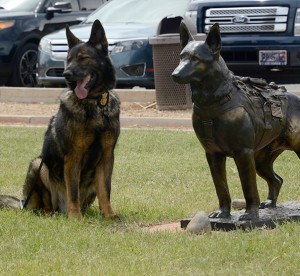 Chrach, 56th Security Forces Squadron military working dog, poses next to a statue dedicated to his service in Fowler Park at Luke Air Force Base, Arizona, April 7, 2017. Chrach is a 9 year old German Sheppard who earned numerous awards and medals for his actions while deployed overseas.

Retiring from the military is a milestone only a few achieve throughout their careers. For military working dogs, their entire life is devoted to service until the day they retire.

“MWDs are such an incredible asset to the Air Force,” said Kyle Alltop, a former 56 SFS MWD handler and Chrach’s new adoptive owner. “These dogs’ lives are dedicated to their duty and service, day in and day out.”

The Air Force places MWDs into specific roles, whether it be bomb and narcotic searching or patrolling with Airmen, the dogs are scattered all across the globe supporting a multitude of missions.

Chrach and Maxo have both been stationed at Luke for a majority of their lives and are dual role MWDs. Their daily duties vary on the day to day tasks assigned but just like Airmen, they could be called to serve overseas at a moment’s notice. Both have deployed several times performing their duties in support of larger missions.

“It’s the deployments and what these dogs have done overseas that make people remember them,” Alltop said. “Everyone gravitates towards them because of their friendly nature but when its game time, they get the job done.”

“People always ask how we know when they should retire and it’s a case by case basis,” Reinhart said. “It really depends on their health and their ability to perform. There is no way of telling how long they will be able to continue their duty or what age they will be done.”

Currently, Chrach is 9 years old and Maxo is 8. While stationed at Luke, both dogs have set an example for new dogs coming in of the standards to which they will be expected to perform.

“The way Luke treats MWDs is unique,” Alltop explained. “They truly make sure that the dogs are appreciated and get what they need but also put a high value on training them to be the best.”

Chrach, who has become somewhat of a celebrity MWD, had a statue dedicated in his honor at Fowler Park on base the day of his retirement. Chrach earned numerous awards and medals for his actions while deployed overseas.

Alltop was Chrach’s handler during his deployment to Kuwait and his first handler when arriving to Luke. According to Alltop, as Chrach enters his retirement they plan on paddle boarding, swimming and just letting Chrach roam free on Alltop’s seven acres of land.

Maxo was forced to retire because of a non-cancerous mass in his spine. Maxo is still able to run, play and be a normal dog but not keep up with the strenuous schedule of being a MWD.

“I am very happy to see both dogs going to good homes for their retirements,” Reinhart said. “I hope they come back to visit regularly.”